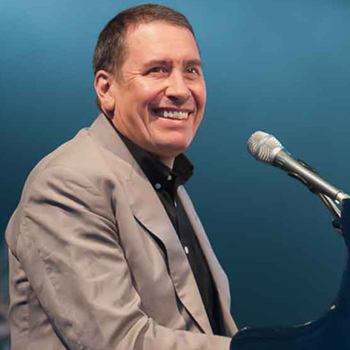 Jools Holland was born in 1958. At the age of eight Uncle Dave started to teach him how to play Boogie Woogie piano and Jools discovered he could play pieces by ear and that he had a natural talent for music. In his teens he graduated to playing in pubs and clubs around South London where at fifteen, he met up with Chris Difford and Glen Tilbrook. Together they formed Squeeze, who went on to sell millions of records. Their first hit  was " Cool For Cats" .

In 1990 Jools left Squeeze to concentrate on his own band and brand of music. Jools was joined by Squeeze drummer Gilson Lavis.  Jools Holland and his Rhythm & Blues Orchestra have played at such diverse venues as Canterbury Cathedral, Kew Gardens and the Edinburgh Festival.

Jools has recorded and performed with many legendary artists and is respected by his peers as a talented musician and songwriter.  Sting, Cher, Luther Vandross, Steve Winwood, Robert Palmer, Dr. John, Lemmy, Larry Adler and George Harrison are just a few of the names he has played with. Jools has also written and produced TV and film theme music and has hosted, written and starred in a variety of TV shows including " The Tube", " Juke Box Jury", " Later With Jools Holland", and with his band was the regular musical feature on " Don't Forget Your Toothbrush".  His annual Hootenanny is also now an integral part of New Year festivities.

Despite all his TV appearances, playing music has priority in his hectic schedule. He has released numerous albums and is almost constantly on tour with the Rhythm and Blues Orchestra.

Despite all his TV appearances Jools insists on following his gift for music, which has major priority in his hectic schedule. He has release numerous albums and is almost constantly on tour with the Rhythm and Blues Orchestra.