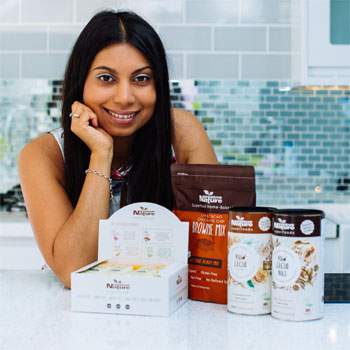 Julianne Ponan, is causing a stir in the health food world.

At 22 years old, became owner and CEO of Creative Nature a superfood brand. She suffers from anaphylaxis since she was 2 years old which is why she focused on Creative Nature launching a range of free from foods with good nutrition. Within an 24-month period she had put the company back into profit, raising the brands profile and launching new product lines all with only 2 members of staff.

Julianne has taken Creative Nature from strength to strength launching the brand into Sainsbury’s, Ocado, over 2000 Co-op Stores, Asda and TK Maxx. Creative Nature is at the forefront of ‘superfood’ and ‘free from’ innovation, launching completely unique baking mixes that push the boundaries of healthy home-baking. In 2017 Julianne has secured national listings in Sainsburys for her Baking Mixes and The Co-operative for her healthy flapjack bars.

She is also the youngest winner of the National Natwest Everywoman Artemis Award for Women Entrepreneurs. Julianne also won 3 awards in FSB Surrey Business awards for Young Person in Business, Real Life Entrepreneur and Overall Winner, she is Director of the Year at the Toast of Surrey Awards and Young Director of the year in the IOD Awards and was recently voted by the public as the Guardians Leader of the Year.

Julianne is also a mentor for Virgin Startup, keynote speaker and enjoys helping young entrepreneurs achieve their goals with particular focus in the food/retail industry.

This year Julianne’s company Creative Nature has won scale up of the year in the FSB National Awards and fought off fierce competition of over 2000’s businesses Nationally to take the title of the FSB Business of the year and Overall Winner of the night 2018.

Julianne has recently been on Dragons Den, slayed dragons but turned down investment. Along with this Julianne has been featured in the Huffington Post, The Guardian, The Independent, Sky News and also a guest judge on Britains Next Top Model.

Julianne strives to prove the impossible is possible.

Having suffered from anaphylaxis since she was two years old, Julianne wanted to launch a range of “free from” foods with good nutrition. At just 22 years old, she acquired, via a Management Buy Out, Creative Nature, a superfood brand that was struggling with heavy losses and turned it around into profit within 24 months.