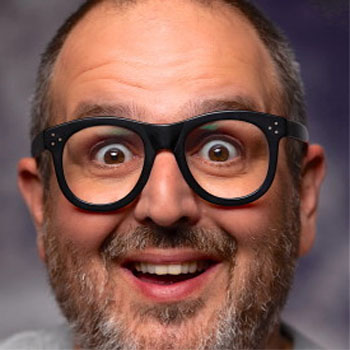 One of the brightest stars working on the British comedy circuit, Manchester based Justin Moorhouse is a talented stand-up comedian, writer and actor - not to mention an award-winning radio presenter and a household name in his native North West.

Early in his career, his exuberant, larger than life personality and cheeky northern charm quickly allowed him to build a reputation on the live comedy circuit.  He was named the 'City Life Comedian of the Year' in 2000 and was second placed in the 'BBC New Talent Awards' the following year.  He was soon supporting stand-up luminaries Jimmy Carr, Peter Kay, Dave Spikey, John Thomson and Johnny Vegas on tour before going on to play to sell out audiences across the North West with his own solo shows.

Justin's debut solo show 'Local Knowledge - The Smallest Tour in the World' toured the North West in 2004 earning him a nomination for 'Best Comedy Performance' at the prestigious Manchester Evening News Theatre Awards alongside the likes of Bill Bailey and Ross Noble.  He took to the road again in 2006 with sell-out performances of his second show 'The Difficult Second Tour'.  2007 saw him making his hotly anticipated debut at the Edinburgh festival with his third solo show 'Who's The Daddy?'.  With a run of sell-out shows and a clutch of 4 star reviews under his belt, Justin is now gearing up to tour show in the autumn.

Recognising his exceptional talent, Manchester's Key 103 (the biggest commercial radio station outside of London) snapped Justin up as a presenter back in 2003 and for the past 4 years, he's presented his afternoon show every weekday between 1-4pm.  His warmth, charisma and quick witted spontaneity quickly proved to be a huge hit with listeners and radio industry officials alike and he's clocked up nominations for the highly prized 'DJ Of The Year' Award in the prestigious Sony Radio Academy Awards as well as 'Presenter of the Year' in the Commercial Radio Awards.  Justin continues to go from strength to strength and his show was nominated again in the 2006 Sony Radio Academy Awards for the 'Interactive Programme Award' with Judges describing Justin as 'cheeky, funny and irreverent'.

On TV screens, Justin is perhaps most recognisable as Young Kenny in the hugely successful, award-winning 'Phoenix Nights'.  He spent the whole of the second series with his face painted as a tiger and also made a brief appearance in the spin-of series 'Max & Paddy's Road To Nowhere'.  Other recent TV appearances (without the tiger face) include 'The Charlotte Church Show' (Ch4), '8 Out of 10 Cats' (Ch 4),  'The Grumpy Guides' (BBC 2) 'Shameless' (E4), 'The Live Floor Show' (BBC 2), 'Does Doug Know' (Ch 4), 'Stan The Man' (Granada), prison drama 'Buried' (Ch 4) and 'The World Stands Up' (Paramount).  He also presented 'Talk of the Town', a late night late entertainment show transmitted on Friday nights in the Granada region.  He can also be seen presenting 'Twisted TV' a bizarre clip show due for transmission on Challenge in the near future.

The multi-talented Mr Moorhouse made his first foray into pantoland in 2003 being labelled "A Panto Star" when he landed the lead comedy role in Peter Pan playing Captain Hook's sidekick Smee at the Lowry Theatre.  He's also played the comedy lead in Beauty and the Beast and appeared alongside Coronation St stars John Savident and Suranne Jones in Snow White at the Manchester Opera House last Christmas, playing the lead comedy role of Muddles, once again to great critical acclaim.

Justin's writing credits include 'The 11 O'Clock Show' and Channel 4's hugely popular panel show '8 out of 10 Cats'.  He also wrote a comedy drama for BBC Radio 4 entitled "An Insurance Inspector Calls" which was critically acclaimed and described as "a poignant comedy" (The Guardian), and "an entertaining comedy drama...warm, funny and eccentric" (The Daily Mail).  It received 'Pick of the Day' in the Guardian, the Daily Mail, the Sunday Times and the Daily Telegraph and 'Pick of the Week' in the Observer.  He is also now a regular contributor to the Manchester Evening News where he writes his own weekly column every Friday.

As his profile continues to rocket, Justin is in tremendous demand within the corporate market.  He has performed at hundreds of corporate events nationwide and also had the honour of hosting the prestigious Europa Festival event in Manchester's Exchange Square which was attended by 10,000 people.  Following in the footsteps of previous hosts Peter Kay and Dave Spikey, Justin has also hosted the prestigious MEN Theatre Awards and more recently The Manchester Awards.

Justin is now in great demand as a stand-up, actor, writer, TV and radio presenter, voiceover artiste and corporate performer and is busy developing several original ideas for radio television - as well as gearing up for his autumn tour and presenting a live daily radio show.  This is all a far cry away from being fired from his day job in 2000 over a misunderstanding with a parking ticket, company car, and a firm of Salford bailiffs!

"Justin was fantastic! he gauged the 400+ audience spot on for his set and was very good with the sponsors and winners when they went up onto the stage during the presentation ceremony.I would thoroughly recommend him"