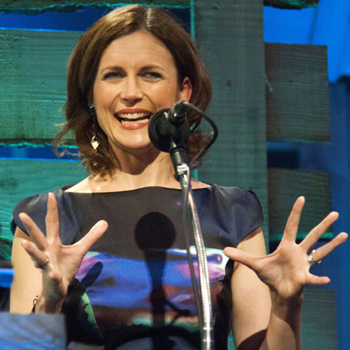 Popular host and TV presenter, Katie Derham was born in Stockport, Cheshire and educated at Cheadle Hulme School. She completed her BA honors degree in Economics at Magdalene College, Cambridge.
Katie began her broadcasting career at the BBC, starting as a researcher on Radio 4's Moneybox. In 1995 she won the Bradford & Bingley "Best Personal Finance Broadcaster Award" for her work as a presenter on Radio 5 Live's Moneycheck. She then moved to BBC television in 1996 as a consumer affairs correspondent and was also a reporter on the Film programme.
In 1998 she joined ITN as the Media and Arts Editor for ITV News and, at the age of 27, became the youngest newscaster on British national television since ITN's creation in 1955.
In 2004, Derham became the main female presenter of the ITV News at 1:30, and a relief presenter of both the ITV News at 6:30 and the ITV News at Ten. She also co-presented the ITV London news programme London Tonight. She hosted her last programmes on ITV1 in June 2010.
In 2010 she joined the BBC and fronted the coverage of the Proms for BBC Two, BBC Four and Radio 3.  She is also a presenter of Radio 3's Afternoon on 3 and Breakfast programmes, having previously presented the Hall of Fame Concert on Classic FM.  She presents the Traveller's Tree series on Radio 4 and makes the occasional guest presenter appearance on Saturday Live.
Katie hosted the Classical BRIT Awards ceremony four times from 2001 to 2004.

In August 2015 the BBC announced that Derham had signed up to appear in the thirteenth series of Strictly Come Dancing. Her partner was Anton du Beke. In Week 4, the couple finished top of the leader board. In weeks 9 and 11 they performed their best dances, both earning 35 out of a possible 40. In the semi-final they finished last in both dances and were in the dance-off with Anita Rani and Gleb Savchenko. The judges voted them through to compete in the final, (the first time Anton had done so,) where they finished 4th of 15 couples.

In September 2017, she presented coverage of the Last Night of the Proms on BBC Two and BBC One.

"Katie was absolutely fantastic and brought the whole event Conference & Evening together she really fits in so well with all our people, so natural.  An absolute pleasure having her work with us."  Suzuki Conference - December 2013
"Our client, Suzuki, was absolutely thrilled with the effort she put in, her professionalism but also the fact that she made such an effort to become part of the team. The overall response to the event from both senior management at Suzuki and dealers was that it was the best Suzuki conference they have ever attended thanks in large part to Katie doing such a great job throughout the two days."  Praise for Katie from NOAH - December 2011
Read More