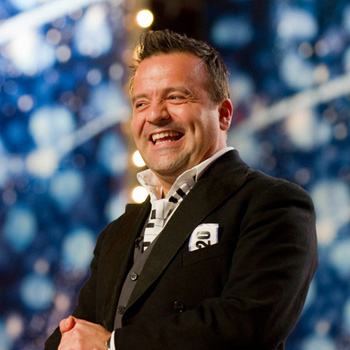 Comedian and pianist Kev Orkian is one of the UK's most talented up-and-coming entertainers. Kev has performed with global opera star Katherine Jenkins, sold out his one-man show in theatres around the world, from New York, Los Angeles and Toronto to Dubai, Oman and Australia, and been hailed by HRH Prince Charles as an "Absolute Genius".

The British-Armenian musician, comedian and actor was born in London.
Due to the similarities with his comedy timing, acting background and training as a classical pianist, Orkian has been compared to the likes of Victor Borge and Dudley Moore.

Between 2003 and 2009, Kev Orkian spent a lot of his time touring the UK as the support act for some of the biggest names in British comedy and has previously starred in West-End London musicals including 'Fame', 'Happy Days' and 'Boogie Nights' alongside Dancing on Ice winner and Emmerdale actress Hayley Tamaddon.

In 2009 Kev Orkian became a regular on the UK comedy circuit performing at well-known clubs such as Jongleurs where his comedy rendition of Elton John's 'I'm Still Standing' has been described as Comedy Gold and has generated standing ovations and received encores, as well as rave reviews for the originality of his act.

In May 2010 Kev Orkian took part in series 4 of ITV's   'Britain's Got Talent'.  He performed his trademark Elton John and gained three YES votes from Simon Cowell, Amanda Holden and Piers Morgan, the latter of whom commented "That is one of the smartest things I've seen", winning himself a place in the live semi-final, although he didn't make it through to the final.

In June 2010, Kev Orkian performed for HRH The Prince Philip, at the celebrations for his 89th birthday and in the same month performed a live comedy 'sketch' with opera diva Katherine Jenkins at a private birthday party where Lionel Richie and Bobby Davro also featured.
In August 2010 Kev Orkian took his 'Illegal Tour' to the Edinburgh Fringe, appearing at the Underbelly, in his debut appearance at the festival.
Kev is available for awards dinners, private parties and corporate functions.  He offers an exceptional blend of  stand-up comedy and musical cabaret, making him perfect for corporate audiences. He also has an extremely wide appeal with his Elton John "I'm Still Standing" scratchy CD version and the "Foreigner Musical" with his 'own words' set to scores of West End Musical classics. His Opera Routines and Classical Requests go down very well with more high-brow audiences and his Blues number leaves every audience on a high and stomping their feet.
An avid charity worker, Kev has raised thousands of pounds for various charities, including the Willow Charity for Bob Wilson, Safe Hands for David Seaman, NSPCC, Armenian Orphans and the Bobby Moore Fund. Through his friendship with comedian Jim Davidson he has performed regularly for the BFF (British Forces Foundation), touring Army and Navy bases around the world, entertaining the British and American Forces. He is also a co-founder of the ITFO (International Trust Fund for Orphans), a charity that raises money for orphaned children around the world.
Read More