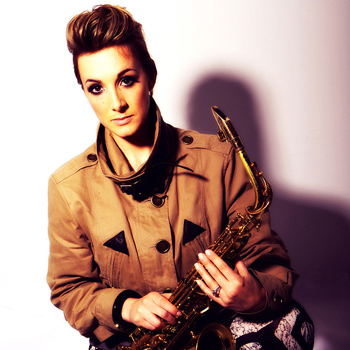 Louise Evans is Lady V, a saxophonist with a unique talent that has taken her around the world from the UK to Australia and all points in-between. She has appeared at some of the world's greatest nightclubs and events and is a key member of the Fierce Angel team.
When she was 17 Lady V started performing on the house music scene in her local venues in the North East, quickly gaining recognition from DJ's and promoters. She soon secured regular bookings at club nights, VIP events and album launch parties around the UK and Europe.
Whilst still performing regularly Lady V successfully graduated from Paul McCartney's Performing Arts Institute in Liverpool with a BA Hons degree in music. After graduating Lady V was soon being booked for weekly national and international performances with independent club nights and global brands that include Hed Kandi, Fierce Angel and Pukka Up.
Her busy schedule has included performances all over the world, from Pacha London, Gatecrasher Birmingham and the Creamfields Festival, to Ellui South Korea, Q'Bar Bangkok, Euphoria Kuala Lumpur, Full Moon Party The Philippines, Sky Garden Bali, Pure Jakarta, Sea Lounge Monaco and Cocoon Frankfurt.
As well as performing live Lady V has appeared on tracks from Toolroom and Fierce Angel records. Her two biggest hits were appearing with The Fierce Collective and Peyton on the club hit "Baker Street" and with Martin Wright & Angie Brown on "Can't Get To Sleep."
She continues to tour with Fierce Angel and her debut solo track for the label is about to be recorded.

Lady V is a saxophonist with a unique talent that has taken her around the world from the UK to Australia and all points in-between.