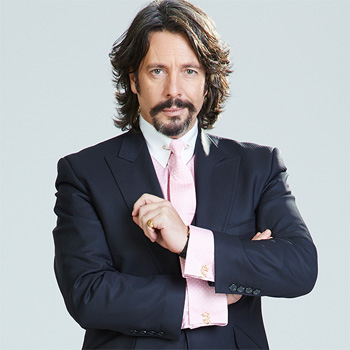 Laurence Llewelyn-Bowen – Britain’s favourite interior designer. He is not only one of the UK’s most famous faces but the LLB Home brand has ranked consistently in the top 3 designer home ranges in the UK every year for the last 10 years.

After 25 years since he first hit our screens, Laurence is as popular as ever –  as seen by the recent announcement that Channel 4 are bringing back Changing Rooms later this year, with Laurence as the only person from the original line-up.

It’s not just here in the UK that Laurence is known and so well  loved – he has international appeal from his worldwide success: In the UK he can be seen on shows such as BBC1’s ‘DIY SOS: The Big Build’; In the US he is the host of the new international spin off of ‘My Lottery Dream Home’ for HGTV, in Australia he is one of the judges on Channel 7’s hit series ‘House Rules’ and in Asia he is head judge on the hugely successful ‘The Apartment: Style Edition’.

Meanwhile, during lockdown he's been providing a unique spin on the world of video conferencing, joining client's Zoom calls where he critiques attendees homes and interiors to much amusement all round! Rest assured, he only picks on those up for a laugh, but on occasion has been given a full tour of the house!