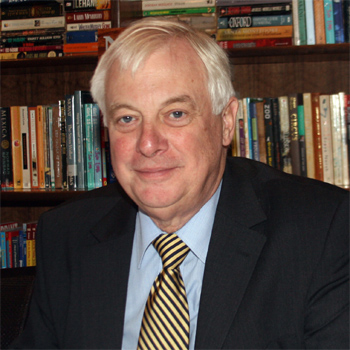 Christopher Francis Patten was born in 1944. He was educated at St Benedict's School, Ealing and Balliol College, Oxford, where he read Modern History and was elected a Domus Exhibitioner. In 1965 he won a Coolidge Travelling Scholarship to the USA.

In 1983 he wrote 'The Tory Case' a study of Conservatism. Following the General Election of June 1983, Lord Patten was appointed Parliamentary Under Secretary of State, Northern Ireland Office and in September 1985 Minister of State at the Department of Education and Science. In September 1986 he became Minister for Overseas Development at the Foreign & Commonwealth Office. He was appointed to the Privy Council in 1989 and was appointed a Companion of Honour in 1998. In July 1989 Patten became Secretary of State for the Environment. In November 1990 he was appointed Chancellor of the Duchy of Lancaster and Chairman of the Conservative Party, a position from where he masterminded John Major's General Election victory.

Lord Patten was appointed Governor of Hong Kong in April 1992, a position he held until 1997, overseeing the return of Hong Kong to China. He was Chairman of the Independent Commission on Policing for Northern Ireland set up under the Good Friday Peace Agreement, which reported in 1999.
In September 1999 he was appointed European Commissioner for External Relations, a post he held until November 2004. On leaving office in Brussels he was made a life peer. Lord Patten is also Chancellor of Newcastle and Oxford Universities.

Lord Patten married Lavender Thornton in 1971. They have three daughters.

Lord Patten reads a lot and is keen on tennis and gardening. In 1998, he wrote 'East and West', a book on Asia and its relations with the rest of the world. 'Not Quite the Diplomat' was published in October 2005 by Penguin Books and in the US in 2006 . 'The Way the World Works' was published in 2007 and 'What Next?: Surviving the Twenty-first Century' was published in 2009.