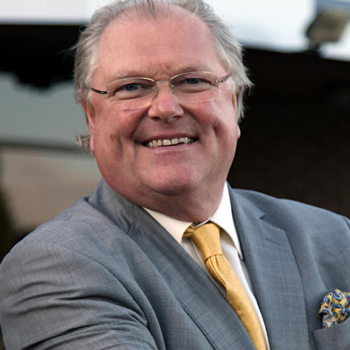 Sir Digby Jones was United Kingdom Minister of State for Trade & Investment July 2007 - October 2008, accepting a lifetime peerage in the House of Lords where he now sits on the cross benches and is known as Digby, Lord Jones of Birmingham. During his 15 months in Ministerial office he made 45 overseas visits, travelling to 31 different countries and meeting with the world's top business leaders and politicians. He changed the way that UK Trade & Investment was perceived in delivering a record year for inward investment and expanding the UK's presence in all of the major international markets. Following his departure from Ministerial office he was appointed as a Business Ambassador for UK Trade & Investment.

Prior to this, he was the former director general of the CBI. He was considered to be one of the most successful holders of the post, and was an energetic champion of British Business around the world.

Born in Birmingham in 1955, Digby won a major scholarship to Bromsgrove School and gained a 2:1 honours degree in law at University College, London.

In 1978, after some time in the Royal Navy, he started his career with corporate law firm Edge & Ellison making partner in 1984. It was in corporate finance and client development that he made his name and was responsible for developing the firm's London presence and establishing its representation in many European countries as well as several states in America. He was also involved in most of the major management buy-outs and merger and acquisition activity in the West Midlands in the late 1980s and early 1990s before becoming senior partner in 1995.

In 1998 he joined KPMG as vice-chairman of corporate finance, where he acted as close adviser to many public companies across the United Kingdom and in KPMG's global markets.

On 1 January 2000 he became director-general of the CBI and in September 2003 his term was extended by 2 years at the request of CBI members. As the chief executive of the UK's 'voice of business', he regularly and repeatedly visited businesses around the UK and across the world, taking their views back to those who make the rules, be they in Westminster or Brussels. He appeared regularly on television, radio and in the newspapers, promoting the interests of wealth and job creation in the UK, and has taken the British business message to 60 different countries, and in the process set-up CBI offices in Brussels and Washington.

He holds a variety of directorships in both the public and private sectors and holds honorary doctorates from a host of universities. He is involved with a number of charities, including holding the vice presidency of UNICEF and the Chairmanship of Cancer Research UK Ambassadors for whom he raised £191,000 by running the Flora London Marathon in April 2005 in the modest time of 5 hours 58 mins, as well as supporting a variety of organisations in his beloved West Midlands, such as the Birmingham Hospice appeal, for whom he personally raised £218,000 by cycling from John O'Groats to Lands End in 1998.

Sir Digby is an outstanding orator - witty, authoritative, full of passion - and always tailors his material to suit his audience.

He is an experienced keynote speaker and a popular choice for conferences and seminars and can speak on a wide range business issues from international trade opportunities to the training & skills required to cope with globalisation, drawing on his lifetime of unique achievement having worked closely with governments all around the world promoting British business.

As an after dinner speaker, Digby has a fund of anecdotes to draw upon involving many of the famous people he has done business with over the years from leading politicians to show business personalities.

He lives in Marylebone and Warwickshire with his wife Pat. He enjoys the theatre, skiing, football, rugby, cricket and has more than a passing interest in military history.

Was UK Minister of State for Trade & Investment until August 2008. Prior to this he was Director General of the CBI and appeared in the latest incarnation of the BBC’s Troubleshooter programme, following in the footsteps of Sir John Harvey Jones. A board member at Jaguar Land Rover, HSBC and Triumph Motorcycles, he is an enthusiastic champion of British business and has led trade delegations to the Far East.