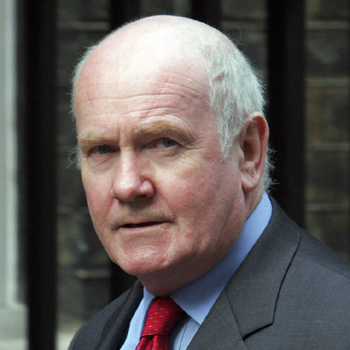 John Reid is the most experienced Cabinet minister of modern times.  He has held more ministerial posts at Cabinet level than any other politician in recent history.  In range of portfolios, and in breadth and intensity of change management across departments, his experience is unparalleled.

Following almost quarter of a century as an MP in the House of Commons, he was honoured with a nomination to the UK Upper Chamber as a Member of the House of Lords.  He is a Principal in the Chertoff Group; an Hon. Professor at University College London; Chairman of the Centre for Security and Resilience Studies at UCL; a Consultant to the Private Sector; Chairman of Celtic Plc. He holds a BA (Hons), PhD, ACII, and an Hon. Doctorate from Stirling University.

As Defence Secretary and Minister he presided over the Strategic Defence Review which reconfigured the whole of the British Armed Forces in the post-Cold War period.

As Transport Minister he played a major part in rescuing and delivering the new Jubilee Line extension, one of the country's major engineering projects.

As Health Secretary he oversaw a major reduction in both waiting times and waiting lists for hospital operations the lowest for a generation - and drove the opening up of the NHS to independent provision.

As Home Secretary he took the much-maligned Home Office by the scruff of the neck, famously declared it unfit for purpose, introduced a series of radical internal reforms and re-focussed the whole Home Office towards the contemporary challenges of International Crime, Immigration and Counter-Terrorism.

He has overseen and shaped the strategic direction, decision making and communications of important Departments of State numbering a payroll of up to two and a half million employees (Department of Health, the NHS and Social Work.)

John Reid has been at the centre of the major political developments of the Government during all of this period. In particular, his expertise in the field of security issues is unparalleled, having served as Minister for the Armed Forces, Secretary of State for Defence, Secretary of State for Northern Ireland, and most recently as Home Secretary, the lead minister for domestic counter terrorism.

He is familiar with a wide range of governmental institutions, from domestic to international; as Secretary of State for Scotland, Northern Ireland and Defence.  His ministerial experience is buttressed by intellectual ability.  He is widely travelled and well read. Reid has considerable expertise and experience in strategic planning, risk assessment and response.

He has a BA (Hons) History and a PhD (Economic History).  He is an Associate of the Chartered Insurance Institute and has an Hon Doctorate (Stirling Uni.) Patron, Painting and Patronage, (Saudi-UK cultural and educational Exchange Programme).

He has been married since 2002 to Carine Adler, an award-winning scriptwriter and director.  He has two sons, Kevin and Mark, to his late wife Cathie (d.1998). He enjoys football, crossword puzzles and reading history.