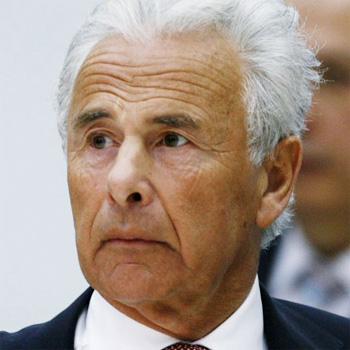 Lord Levy was a senior member of Prime Minister Tony Blair's inner circle and acted as his personal envoy in which role he travelled world-wide  meeting many Heads of State and senior politicians on the Prime Minister's behalf. He also acted as Tony Blair's adviser on the Middle East and in this role he established close relationships with both senior Arab and Israeli leaders.
His unceasing efforts to move the peace process forward received many glowing commendations from former Prime Minister Blair as well as Prime Minister Gordon Brown. Tony Blair praised Lord Levy's extraordinary energy and ability and wisdom, compassion and humanity adding that Britain would not have been able to play a central role in Middle Eastern diplomacy without him. Gordon Brown said we should work together as Tony Blair and Lord Levy did for a two state solution security for Israel and a viable state for the Palestinians.
Lord Levy was the Labour Party's chief fundraiser and has been a driving force behind the Academies Programme in Education. He first met Blair in 1994 and was instrumental in the creation of New Labour.
Lord Levy qualified as an accountant before making his name and subsequent fortune in the music industry. He founded Magnet Records which was sold to Warner Brothers in the late 80s, and whose artists included Alvin Stardust and Chris Rea. He is now Chairman of International Standard Asset Management. He is also involved in a wide variety of public communal affairs, deeply rooted in charitable work with an abiding interest in the voluntary sector, welfare and education. He is renowned for his fundraising skills and has been described as the number one fundraiser in the UK.
Lord Levy has been the keynote speaker at many events, particularly in the voluntary sector, over a number of years. He has also been the guest speaker at both the Oxford University Union and Cambridge University Union. Lord Levy is an outstanding and compelling speaker.
'What an inspiration if only our organisation had a Lord Levy'
'It was a master class in how to ask a privilege to hear him'
'Loved his honesty about what works and what doesn't how do we get hold of him!!'
'He made us feel great the way he asked us all for questions and also he took the time and trouble to shake all our hands'
'Thank you for introducing Lord Levy to the group he makes it look so easy but he obviously puts his heart and soul into it'
Read More