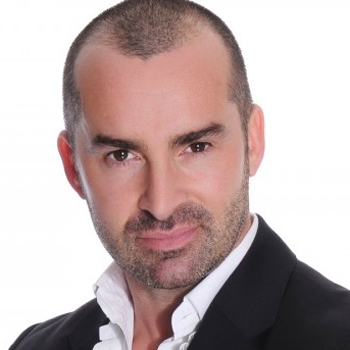 Dance expert, choreographer and television personality, Louie is artistic director at the London Pineapple Dance Studios and featured in Sky1's docusoap Pineapple Dance Studios. He is also one of the judges for Dancing on Ice.
Louie is one of the dance industry's most unique talents with a reputation that precedes him. Known affectionately as 'Lay out Lou with liquid legs and a lisp', he attributes his astounding flexibility to his privileged council estate upbringing.  When faced with the choice of going to work with his Dad at John's Tyres and Exhausts or attending dance school with his two sister, Louie opted for lycra.
The raw talent was there and, encouraged by his dance teacher, his parents took out a second mortgage to send Louie to the prestigious Italia Conti Performing Arts School.  At the age of 13 Louie made his West End debut in Bugsy Malone. From there he joined the BBC's Hot Shoe Show, dancing alongside Wayne Sleep and Bonnie Langford before his undeniable talent won him a three year scholarship at the London Studio Centre.
After graduating Louie joined the original award-winning cast of Miss Saigon, where he helped to create the show's thrilling acrobatics.  A move to Rome to join RAI UNO TV's show Fantastico earned him the coveted title of Primo Ballerino and he danced with Tina Turner and Stevie Wonder.
Returning to London he toured and worked with Take That, E17, 2 Unlimited, Boyzone, Eternal, BjÃ¶rk, Kavanagh, Kim Mazelle and Jocelyn Brown and was one of only five professional male dancers accompanying the Spice Girls on their debut SPICEWORLD tour travelling the globe for a whole year.
On his return to London, Louie joined the cast of Cats as Magical Mr. Mistoffelees (a name he has trouble pronouncing) and for a year wore a cat suit and yak's-hair wig and tail. He followed this with the Pet Shop Boys hit musical Closer to Heaven.
But encouraged by friends and colleagues, he started Edit Agency at Pineapple Dance Studios where, as Artistic Director, he recruited dancers and choreographers for the biggest names in the business such as Kylie, Mariah Carey, Robbie Williams and Will Young, to name but a few.
Edit Agency's reputation grew and Louie's with it.  Trouble TV recruited him for three series of  Bump N Grind which was also aired on BBC America and other North American channels. His television career began to snowball and he went on to choreograph Channel 4's Big Brother Panto; he also appeared as a dance expert on E4's Big Brother's Big Mouth, Channel 5's Battle Pop Stars, My Bare Lady for Fox America and Bravo. He was also a judge on Sky One's Cirque de Celebrité.
Then in 2008 he was a judge on NBC's 'Celebrity Circus' and was voted by Hollywood.com as one of the Top Ten Reality Show Judges in America.
"He was fantastic - we couldn't have asked for more!"  Girl's Day Out Show for Rah Productions - April 2012
Read More