Magic on the Menu 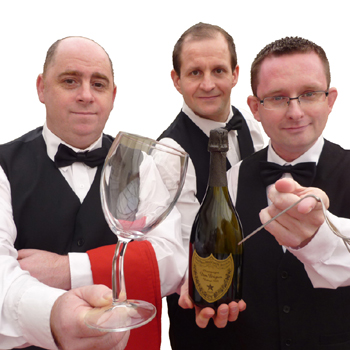 Pioneered by The Three Magicians in the 1990's, Magic on the menu's undercover magical waitering act transforms what could be just another dinner into an unforgettable event.
Performing as genuine waiters from the moment guests arrive, The Three Magicians bemuse diners with plausible, but particularly eccentric service. Their unusual personalities slowly develop and the introduction of some impromptu magic takes guests by surprise.
Their spoon-bending, bottle-producing pickpocketing antics comically escalate between courses and it slowly dawns on guests that they have been a part of an undercover magical scam. Their cover is finally fully blown as they combine to present their finale, with participation, laughter and maybe even the host/MD as an assistant!
"Magic on the Menu" provides a whole new twist to the standard format of table-hopping magic. There's no card tricks, no magical introduction, and it is not a "wacky waiter" show: just good, polished, proven entertainment that will keep your guests talking about your event for a long time to come...
Three very special waiters serving a whole menu of surprises, comedy, and magic.
"Magic on the Menu went down a treat with all our guests. They mingled in so well that no-one realised they were not part of the catering staff. What an act. Good reviews all round. They were great." October 2014
"Magic on the Menu were fabulous and they went down a treat with our conference delegates.  Matt, Andy & Iain were very entertaining and extremely professional.  On behalf of the Finance Contact Steering Group, please would you pass on our heartfelt thanks to the 'Magic on the Menu' team for providing such an entertaining & enjoyable evening. They definitely had our delegates intrigued and mesmerised as to how the tricks were performed and finished with a fabulous finale, much to the embarrassment of our conference Chair!"  Contact Conference for the Warrington & Halton NHS Foundation Trust - October 2013
"Magic on the Menu were terrific and worked the floor all evening and then gave a really good performance with audience participation on stage at the end of our Awards Presentations.
Please extend our thanks to them, they were really entertaining!"  Kent Invicta Chamber of Commerce - March 2012
"Magic on the Menu was a success - they loved the act"   RSA's Affinity Partner Event - January 2012

Their undercover magical waitering act transforms what could be just another dinner into an unforgettable event, bemusing diners with their plausible but eccentric service.