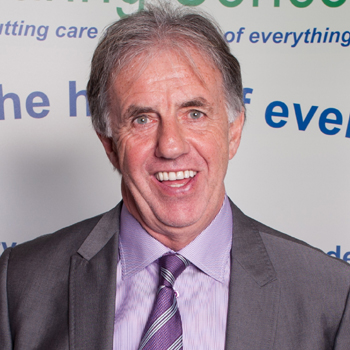 Born in Lancashire, Mark Lawrenson began his fooball career at Preston North End, and also played for Brighton and Hove Albion before moving to Liverpool in 1981.

He won many honours with the Merseysiders and formed a defensive partnership with Alan Hansen that is still regarded as one of the best-ever in English club football.

'Lawro' was capped 39 times by the Republic of Ireland, before an Achilles injury brought his playing career to a premature end at the age of 30.

After hanging up his boots, he managed Oxford United and worked alongside Kevin Keegan as a defensive coach at Newcastle.

Mark Lawrenson has been a regular BBC football pundit since 1997, often teaming up with old club-mate Alan Hansen.

"Mark was terrific very well received by the audience, very easygoing, not fazed by anything, enthusiastic and everything we could have hoped for from a host. I know that many of the attendees enjoyed talking to him about football and their favourite teams.  We especially found his humour and the question and answer session to be highlights of the day. Please pass on our thanks to Mark for doing such a well-received and professional job that many of our customers will be talking about for some time to come we suspect..!"    Mark hosted and presented the awards at the Reco Floor Awards Lunch - March 2014
Read More