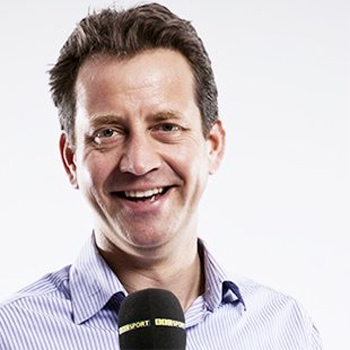 Pougatch is ITV’s lead football anchor presenting live England matches,"The Champions League" and he headed their team at the Euros in France in 2016 and in 2018.

Mark was also the lead presenter for ITV’s coverage of the World Cup in Russia. He combined this role with being BBC Radio 5 Live’s main sports anchor, having presented their flagship Saturday afternoon show, 5 Live Sport and Sports Report. He also presents his own show ‘ Football Today ’ on Monday’s on PLTV (Premier League Television which is broadcast internationally) as well as live matches on a Monday evening.

Along side these television host roles Mark presents every Saturday for BT Sport The Score,  Mark also hosts ITV and Channel 5’s live boxing programmes and The Big Bash Cricket for Channel 5.

For BBC Radio Mark has been the main presenter for the past four Football World Cups, three European Championships, three Ashes tours in Australia, Olympics Games, Commonwealth Games, World Athletics Championships as well as a host of FA Cup Finals, Grand Nationals, Wimbledon tennis and the Six Nations Rugby. He’s also been privileged to commentate on Test Match Special. Mark’s television work includes being a presenter for BBC Sport on Match of the Day and Match of the Day Live, Football Focus, Final Score, BT Sport Score, Sunday Grandstand, World Darts Championship and Open Golf Championship highlights. He has also been a stand in presenter for 5 Live’s Breakfast and Drivetime shows.

At ITV he has presented the live FA Cup draws, Euros 2016 and the Indian Premier League cricket. In 2015 Mark presented The Rugby World Cup for BBC Radio 5 Live.

Mark has also been a columnist for The Times at the World Cup, The Ashes and a regular contributor in The Game on a Monday, has written articles for T2 and The Times on pig-keeping (!) and for The Mail on Sunday on tracing his family’s Ukrainian ancestors.

In 2010 Mark published his first book ‘Three Lions vs The World; The Story of England at the World Cup’ about the history of England’s World Cup adventures.

In 2015 Mark was the main presenter for Radio 5 Live’s coverage of Wimbledon and the Rugby World Cup. In 2016 Mark led the broadcaster’s team for The RBS 6 Nations Rugby Championship for ITV.

Throughout 2019 Mark will be presenting 6 Nations on ITV and the Rugby World Cup from Japan.

Mark is a brilliant compere at corporate events. Some of Mark’s past events include The Variety Club Sunshine Awards, The FA Club at Home Internationals, SportsAid, The Hollis Sponsorship Awards and other charity nights and quizzes.

“Thank you so much for being so incredible last night. You were utterly brilliant. I cannot tell you how wonderful it was to be in your professional hands and you were amazing – you covered every single point I had raised, you engaged everyone and held a geographically challenging room together.We are just overwhelmed at the response and the generosity of everyone – thanks to your encouraging and motivating us all.”

“Mark hosted a Football Association evening with Gareth Southgate for the NSPCC and did his usual excellent, assured job with his customary ease. He interviewed Gareth about the recent World Cup and effortlessly drew the guests in so that they could ask their own questions. I would use Mark again without hesitation.”

“When you hire Mark for a top class event you know exactly what you are getting: a top class professional with expert knowledge and a perfect balance of humour. He makes the talent feel very comfortable and can be relied upon for any environment.”