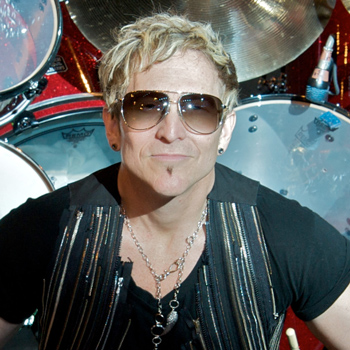 STOP PRESS: Mark will be delivering his keynote Hacking the Rockstar Attitude with us on Thursday 24th September at 4pm- click here for more details!
Mark Schulman, is an American musician and corporate speaker. As a celebrity drummer he has played on the world's biggest stages alongside some of the world's greatest entertainers like P!NK, Cher, Foreigner, Velvet Revolver, Stevie Nicks.  During his long career he has performed for over a billion people.
Born and raised in L.A., Mark became interested in music as a toddler. Aged 3, he witnessed the phenomenon of Beatlemania: “¦I remember seeing a repeat of The Beatles on the Ed Sullivan show with my brother and my folks. I saw Ringo playing the drums and something resonated so deeply with me. Then I saw all the screaming girls, and at that moment, I thought to myself, ˜I want THAT!
A classically trained cellist, Mark played with the Los Angeles Junior Philharmonic. He also played cello on the 2009/2010 P!NK tour.  A music producer, trained audio engineer and studio co-owner, he also taught at the Los Angeles Music Academy and is one of the world‘s most sought after drum clinicians in the world.
Music is not Mark‘s only driving force; he was the chairman of the board of directors of Create Now!, a non-profit organisation founded in 1996, to help change troubled children‘s lives through creative arts mentoring. A cancer survivor himself, Mark has also motivated children and teens through his work doing seminars with the Ronald McDonald House and benefits for the Teenage Cancer Trust in the UK.
Mark‘s love for inspiring others is shared through his corporate seminars and his signature Drumming Recording Seminars. An highly entertaining host, MC and keynote speaker, Mark has experience on television, at live events and major corporate conventions for clients such as IBM, CISCO and AVEDA.
As an inspiring keynote speaker Mark is unique, relating his musical expertise as a performer to the corporate environment. His themes include:
Conquering Life‘s Stage Fright: Three Steps To Top Performance
This presentation is like a rock show disguised as a keynote with live drumming, sticky powerful content, interactive drumming with the audience and even jam sessions with the C-Suite! Everyone operates with some degree of risk¦so there will be some degree of fear.  Mark addresses this issue by invigorating  his audiences with world-class entertainment, road stories and three core concepts that give his audiences the blueprint to confident peak performance in their professional and personal lives.¨
Harnessing the Rhythm of Teams¨
An energetic, interactive and anecdotal presentation that gives audiences an experience of the evolution of collaboration through truly unique processes that feature rhythm, rock & roll and performance.
Your Customers and You Are the Band
Using the metaphor of music and stories of world-class performers, Mark guides his audience through entertaining interactive processes and sticky content (as only a rock & roll drummer can do) to give attendees a fresh outlook and experience of the relationship between company and customer.
His new book "Conquering Life's Stage Fright: Three Steps to Top Performance" was published in 2015.
In his songwriting performance program, Mark breaks the audience into small 'bands,' coaching everyone through rewriting lyrics to famous songs, and having each 'band' perform with their lyrics displayed for others to enjoy and support. The experience of creating something that pushes audience member's comfort zones seems to bring out the best team building, cooperation and communication qualities in everyone.  Co-workers see each other in a new light once they have shared in this type of creative and unique performance.
"It's not easy to get a standing ovation from a corporate audience; Mark got two! Mark Schulman's keynote address was truly a great success and made me, the event planner look like a Rock Star!"  Sandy Scheneker / Mktg. Events Manager, Information Global Solutions

Drummer for Pink, who has also toured with the likes of Cher andStevie Nicks. As an inspiring keynote speaker Mark is unique, relating his musical expertise as a performer to the corporate environment.