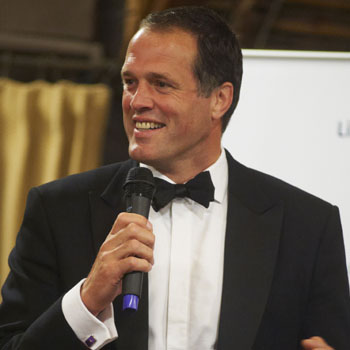 At 6'10" Martin Bayfield was one of the tallest players in rugby, a gift he used to full advantage as one of England's most potent forwards. Since retiring, his height has helped win him the part of Robbie Coltrane's body double as the giant Hagrid in the Harry Potter films.

On the field Martin enjoyed a successful international career, winning 31 England caps and two Grand Slams. He played in the World Cup in South Africa and was selected to represent the British Lions in New Zealand. He is now an established member of the BBC commentary team, as well as host of Channel Five's NFL coverage and The World's Strongest Man.

Martin Bayfield is an accomplished awards host and a hugely entertaining after dinner speaker, with impeccable comic timing. Appealing to all manner of audiences, he points to one or two telling differences between football and rugby. He might also recount tales from his early days as a police protection officer, like the time he fell asleep while guarding Ian Paisley.

"Naga and Martin were both brilliant.  We really couldn't have asked for a better host or speaker.  In each case I feel they were the best yet.  Naga was a delight to work with and once again engaged beautifully with the audience - a true professional, with charm and humility.  Martin's after dinner speech was up there amongst the best I have seen - no question!  They both helped to make the entire awards ceremony not only the biggest but also the best yet."   Touchwave Media. Martin was guest speaker at the BCIA Awards, hosted by Naga Munchetty - May 2013.

"Martin lived up to our expectations and went down very well with all of the guests, he was just great throughout the whole evening interacting with the guests before the meal and providing some real 'belly laughs' with his speech - perfect."  CIOB Kent - September 2012

"Martin did a fantastic job...He really was very, very good - charming, engaging, eloquent, informative and above all very funny.  I have had nothing but excellent feed back from all quarters and to be honest he helped to make this year's event the best ever.  I would definitely have no hesitation in booking him again." Touchwave booked Martin for the FETA Annual Luncheon - April 2012

Former Rugby player who has gone on to have a multi faceted career taking in roles in Harry Potter and presenting World’s Strongest Man and Crimewatch, as well as Rugby. At 6”10, he certainly has presence, and has become a fixture on the corporate circuit.