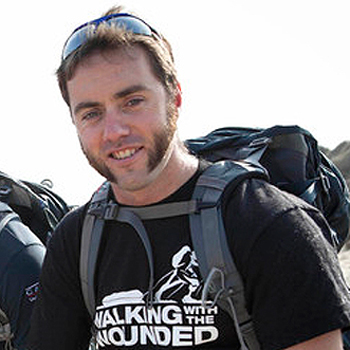 Captain Martin Hewitt served for eight years as an officer with the Parachute Regiment, in the Middle East, Africa, Europe, and North America.  He was injured in 2007 in Afghanistan whilst leading his men in combat - receiving gunshot wounds to the chest and foot.  These injuries paralysed his right arm and ended his military career.
[pic Martin (right) with Prince Harry]
Martin turned his focus on to sport, representing Great Britain in the Paralympic World Championships, competing in Downhill Ski Racing and Captaining the newly formed Combined Services Disabled Ski Team. He represented the army and Great Britain, ski racing at the highest international levels whilst adapting to life with the use of one arm.
On leaving the military, he was asked to develop teams of injured servicemen to take on world record attempts.  In April 2011 he walked unsupported to the Geographic North Pole joined by HRH Prince Harry as part of the Walking with the Wounded North Pole team which successfully made the trek (televised on BBC 1 'Harry's Arctic Heroes').
Martin re-entered the record books in 2012 as the first disabled person ever to reach the summit of Mt Manaslu (8162m) and led a team on Mt Everest 8848M (also with HRH Prince Harry and televised as 'Harry's Mountain Heroes) as well as climbing Mt McKinley (6194m).
His focus is now managing the 'Fieri Grand Slam' team to climb the 7 highest peaks on the 7 continents and walk unsupported to the North and South Poles with disabled adventurers.   They are attempting four world first events.  He will also compete, for Help for Heroes, in the Marathon des Sables in 2014 - a self supported foot race covering 250 km across the Moroccan Sahara over 6 stages in 7 days. Terrain includes high sand dunes, wadis and hard packed desert crust. Competitors must carry their food and survival equipment but are restocked with water each day.
Martin draws on his experiences and skill in military operations, elite sports and 'world first' expeditions to deliver presentations on training, motivation, mentoring, coaching,  confidence building, team building and leadership skills to assist senior business management deliver their message from a unique angle and to help other ex-service men, sportsmen and those who need motivation to fulfil new careers. He talks about maximising performance, the effectiveness of teamwork and how to deal with adversity and challenge.
Martin is one of only a handful with experience in the arctic, the desert, at high altitude and in the jungle. The lessons learnt in these extreme and hazardous environments, and the obstacles he overcame, provide real life examples of how to improvise and adapt to achieve ambitious goals.  He inspires others to push beyond perceived boundaries to achieve the extraordinary.
"Martin is a great speaker whose presentation engaged us all. His fascinating story and positive attitude towards all the challenges he has faced was both motivating and inspiring. He tailored his presentation to focus on specific themes that resonated with our elite performance players and I would highly recommend him as a motivational speaker for any elite sports group or business."       Lawn Tennis Association
"Martin's seminar was quite simply outstanding.  The challenges that he has undertaken and the obstacles that he has overcome are enormous.  He really brings his story to life and all of our players took away some powerful lessons for overcoming barriers in their own lives."  Somerset County Cricket Club
Read More