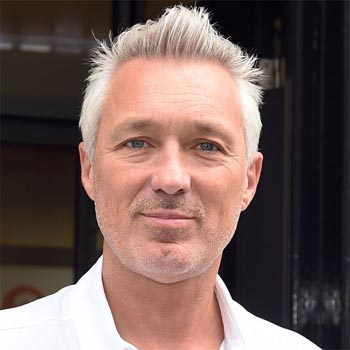 Martin was born in Islington in October 1961. By the age of six he was attending the Anna Scher Children's Theatre, and by the age of ten appeared regularly on television in programmes including RUMPOLE OF THE BAILEY, DIXON OF DOCK GREEN, THE TOMORROW PEOPLE and JACKANORY !

In 1979 his older brother, Gary, formed the new romantic band 'Spandau Ballet' and shortly after Martin was asked to be their 'base player'. The group went on to tour the world and had a number of Top 20 hits in the 80's. The single 'True' made the American Top 10.

By the late 80's Martin had married Shirlie, one of the backing singers from 'Wham', and had started a family. He was then asked to star alongside his brother Gary in the film 'The Krays' which was a huge success. He then moved to Hollywood and made several films including: SUGAR TOWN opposite Rosanna Arquette, MONK DAWSON, VAMPIRES EMBRACE and SAILORS TATTO before returning to Britain.

In 1998 he was offered the role of 'Steve Owen' in the BBC's Bafta Award winning drama series EASTENDERS, a role he played until March 2002. During that time Martin won numerous awards including BEST MALE ACTOR at the National TV Awards and SEXIEST MALE at the National Soap Awards in both 2001 and 2002.

Martin's first two-hour drama for ITV, DADDYS GIRL was screened in September 2002 to great acclaim, and a new 6x1 hour drama series entitled SERIOUS AND ORGANISED, also for ITV, transmitted in early January 2003. More recently Martin was seen in THE FAMILY another 6X1 hour drama for ITV, as 'George Joseph Smith' in BRIDES IN THE BATH a two hour special for YTV/ITV and as 'Howard Walmsley' in CAN'T BUY ME LOVE a 90 minute one off drama for ITV which also starred Michelle Collins.

His book 'True - An Autobiography of Martin Kemp' was published in 2000.