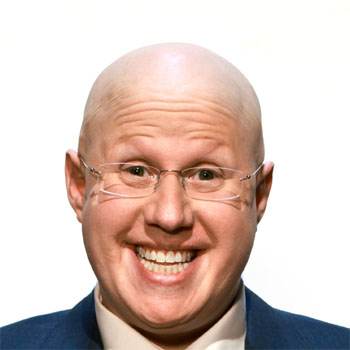 Matt Lucas is a comedian, screenwriter, actor and singer as well! He first came to prominence in ‘Shooting Stars’ with Vic Reeves and Bob Mortimer. Together with David Walliams, he reaped massive success with the smash hit series ‘Little Britain’. The three BBC series and 2 Christmas specials won nearly every award for which they were nominated including 3 Baftas.

One of the world's largest comedy tours ever ‘Little Britain Live’ ran for over 2 years in the UK and Australia. This was then followed by ‘Little Britain USA’ for HBO in the U.S. and BBC1 in the UK, and ‘Come Fly With Me’ for BBC1 which was the most viewed TV comedy that year! Matt also completed two series of ‘The Matt Lucas Awards’ for BBC1, and ‘Pompidou’ for BBC2. Matt has played Tweedle Dee and Tweedle Dum in both ‘Disney Alice In Wonderland’ films.

His music video appearances include the Damien Hirst-directed video for Blur's "Country House", "Jesusland" by Ben Folds in 2005, "I'm with Stupid" by the Pet Shop Boys and "Vindaloo" and "Naughty Christmas" by Fat Les.

Lucas ventured into the world of stage musicals in 2002, when he took a role in Boy George's musical Taboo at The Venue, London. He played the performance artist Leigh Bowery.

His latest film roles include the sci-fi comedy ‘How To Talk To Girls At Parties’ and ‘A Futile And Stupid Gesture’.

He has appeared on a number of US comedies including ‘Community’, ‘Portlandia’ and ‘Fresh Off The Boat’. Back over here in the UK Matt recently starred as the series regular Nardole in’Doctor Who’ series 10.

He fulfilled a lifetime ambition to appear in ‘Les Miserables’ playing Thenardier in both the 25th Anniversary Concert at the O2 Arena, and for a run in the West End. His memoir ‘Little Me’ was published by Cannongate this Autumn.