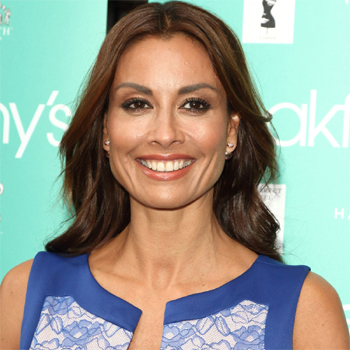 Melanie Sykes was born in Mossley, Manchester. She was first tempted down to London at the age of 19 to join a modelling agency which led to numerous catwalk fashion shows and magazine work including television commercials such as Falmer Jeans and Pearl Drops and a poster campaign for Haagen Daaz.

Melanie's first major break in television came when she fronted the Boddingtons commercial; such was the success of this campaign that Melanie became an on going signing for them.  This led to a number of presenting roles, first on Sky One's Real TV UK followed by guest presentation on the BBC's Holiday Programme.  She hosted the Hit List UK show for MTV and also covered the Phoenix Festival for them.  She has also presented a strand called I Haven't Got A Thing To Wear for Carlton's Afternoon Live.

In September 1997 Melanie signed a major two-year deal with The Big Breakfast.  This move established her as one of the most exciting new faces on Television.  She linked the Oscars live from L.A. for the show; took driving lessons and passed her test, and hosted the Big Breakfast (7.00 am 9.00 am) and the Bigger Breakfast (9.00 am 12.30 pm) throughout the summer of 1998.  She also became the legs and face of Aristoc Hosiery for all their promotional material for the next two years.

1999 saw Melanie hosting the new series of Dream Ticket for LWT, continuing her work with the Big Breakfast and filming a documentary for BBC News and Current Affairs called Melanie Sykes' Southall Stories, which was shown on BBC2.  She was also on our screens on the May Bank Holiday presenting an ITV Disney Special featuring the circus training school in San Francisco.

From September 1999 Melanie started presenting TFI on Galaxy with Tim Vincent.  In 2000, she presented her own show for the Galaxy network every Saturday.

Melanie also co-hosted Miss World which was broadcast live in December 1999 across the UK and worldwide. In  2000, Melanie co-hosted the BAFTAs, and reported for Celebrity, ITV's daily entertainment show. She hosted Carlton Television's Multicultural Achievement Awards and presented the Orange live internet broadcast of the Q Awards.  She went on to co-host Today with Des & Mel with Des O'Connor.

Her other TV work includes hosting shows The Vault, Celebrities Under Pressure, National Television Awards Party of the Year, and the British Soap Awards.  She has appeared as a guest panellist  on Loose Women in 2005 and returned as a guest anchor in 2008 and 2009.  She filled in for Paul O'Grady eleven times as presenter of The Paul O'Grady Show from 2006 to 2009.
In 2008, Melanie was a judge on The Sofa Factor for GMTV, where viewers sent in short clips and the winner got to present TV Pick of the Day and win a trip to Las Vegas.  In August 2011, she returned to daytime television, co-hosting Let's Do Lunch with Gino & Mel and Let's Do Christmas with Gino & Mel with Gino D'Acampo on ITV.
Read More