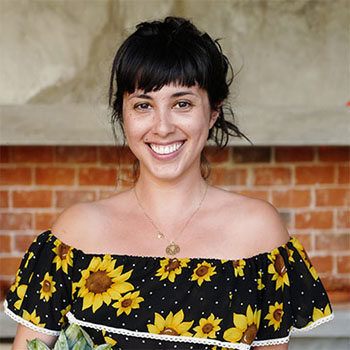 Melissa Hemsley grew up on an army base, with an energetic Filipino mother and was taught about cooking from scratch; about not going to the shops until every ingredient in the fridge had been used-up; and about the importance of cooking and sharing food within a community. Melissa’s professional food career began as a private chef with her sister, Jasmine. After several successful years cooking wholesome, nourishing meals for international actors and musicians like “Take That”, the sisters published two bestselling cookery books and opened a café in Selfridges. A primetime cookery show followed (subsequently sold in 20 countries worldwide), as well as countless appearances on Sunday Brunch, Saturday Kitchen and This Morning, and at food festivals all over the UK – and internationally.

In January 2018, Melissa’s first solo book, ‘Eat Happy’ was published to great critical acclaim – a celebration of fuss-free, feel-good food and packed with simple yet nutritious recipes, all made in under-30 minutes.

Melissa’s focus is on sustainability and she is passionate about the importance of creating extraordinary food that is sourced from suppliers that care – both about the environment and the community; about the ground from which their food is derived, and the people to which it is served.

Melissa writes a fortnightly column on sustainability for Vogue called "Eat, Think, Grow" where she shares practical ideas & easy tips to make a more positive impact on the planet. With a celebration on food, farmers & the land that feeds us.

Melissa is a proud supporter and volunteer for The Prince’s Trust, Mental Health Mates, Future Dreams, Women Supporting Women, Cook for Syria (Unicef), Headtalks.com and is a judge of the Soil Association (Best of Organic awards) and the YBFs (Young British Foodies) and a mentor for Creative Mentor Network.