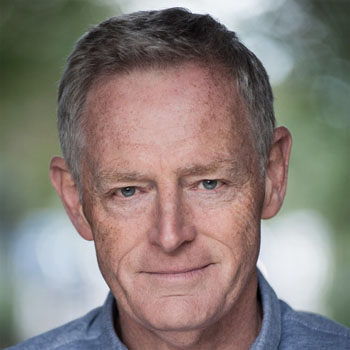 Michael Simkins is described as "One of the funniest writers in Britain" (Daily Mail) and is THE MAN to go to for all the real behind-the-scenes stories about the world of Showbiz!

He has written two best-selling books on the acting profession: "What's My Motivation?" and "The Rules of Acting" which is a modern manual of how to get by as an actor.

He also wrote the shortlisted Costa Book Prize 2007 sporting memoir "Fatty Batter" which descibed his childhood as a fat child growing up during the 1960's in Brighton. It was a best seller!

Michael is also a well-known face on the west end stage and television, with leading roles including Sam Carmichael in Mamma Mia, Billy Flynn inChicago, and Sir Humphrey in Yes Prime Minister.

He is is best known as Hugh Read in Foyle’s War and Steve Lowe in Eastenders.

A consummate actor he has also appeared in films such as "V for Vendetta", "Topsy-Turvy" and "The Iron Lady", and also "The Crown" for Netflix.

As a writer Michael is also a regular contributor to The Daily Telegraph, The Guardian and The Times, as well as being a familiar voice on Radio 4 in programmes such as Today, Front Row, and BH.

An experienced raconteur and host, he has appeared at venues as diverse as Lords cricket ground and The Royal Shakespeare Company at Stratford-Upon-Avon, as well as on transatlantic cruises. A great amusing and intelligent choice for corporate events.