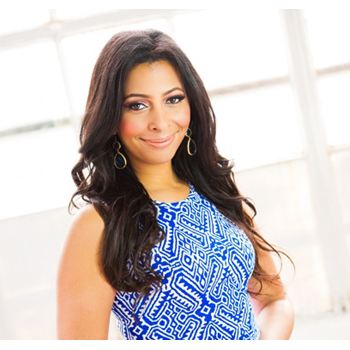 Mimi Fawaz is a multi-talented journalist, who has been been nominated for several awards in the UK and Nigeria.

Mimi is a contributor on CNN for African Football, a freelance journalist at BBC World Service and freelances for the London-based Pan-African TV channel Voxafrica. She has worked with ITN and ITV London Tonight, where she interviewed the Duchess of York and others. At ITV news she also produced their coverage of the 2008 Champions League, held in Moscow.

She's also worked on documentaries about Nelson Mandela's legacy, which saw her travel to Robben Island.

In South Africa she covered the 2013 African Cup of Nations and has interviewed stars of African football. A highly respected journalist, she was producer and presenter of Voxafrica TV's flagship sports programme Sports 360. She also freelances for ESPN and has covered Wimbledon and the US Open for them.

In 2015 she moderated a high profile democracy panel for the Africa Summit at the London School of Economics where Nigerian Vice-President, Professor Yemi Osinbajo was guest speaker.

Mimi covered the FIFA congress in Bahrain and wil cover the FIFA Confederations Cup in Russia in June 2017 for Kwese Sports.

Fawaz's background is Africa and the Middle East and she speaks fluent French and English.