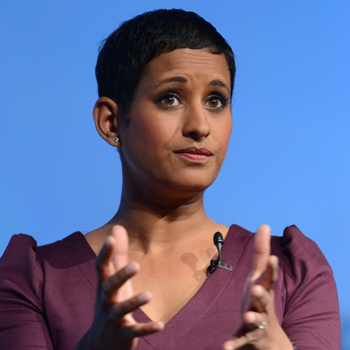 Naga is a co-presenter for BBC Breakfast on BBC1, however her background is in  financial journalism and she formerly presented 'The World Today' on BBC World.
She co-presented BBC's Working Lunch alongside Declan Curry, and prior to that, was a senior presenter on Bloomberg.

Naga has always had a head for figures - maths was her favourite subject at school - yet it was a love of writing that led to her studying English literature and Language at Leeds University. Naga returned to London to get a postgraduate degree in Newspaper journalism which led to her first writing for the City Pages of the Evening Standard and regular contributions to the Business Section of The Observer.

She soon began reporting for Reuters Financial Television, then worked for CNBC Europe as a Senior Producer before becoming a Business Producer and Reporter for Channel 4 News after which she joined Bloomberg.

There she covered stories connected with the health of the Economy - guiding viewers through the start of the credit crunch, the collapse of Northern Rock and the economic downturn that  hit Britain and the rest of the world. At Bloomberg Naga grilled central bankers, Chief Executives and Fund Managers.

Naga also has extensive live event experience, having hosted forums and interviews for both Bloomberg and the BBC, while corporate clients include numerous trade associations and financial organisations, chairing conferences, hosting awards and providing financial overviews on the economy.

Away from business and finance, she has a passion for music - she plays the Jazz Trumpet and Classical piano - and is also a very keen golfer.

"Naga has facilitated a number of events for us and is always a delight to work with. For a recent event our client commented that Naga was truly a professional and they would certainly be happy to work with her again."    DRP Group

"Naga and Martin were both brilliant.  We really couldn't have asked for a better host or speaker.  In each case I feel they were the best yet.  Naga was a delight to work with and once again engaged beautifully with the audience - a true professional, with charm and humility.  Martin's after dinner speech was up there amongst the best I have seen - no question!  They both helped to make the entire awards ceremony not only the biggest but also the best yet."   Touchwave Media.  Naga hosted the BCIA Awards and Martin Bayfield was guest speaker

"Thank you for your outstanding performance during the Forum. You did a wonderful job moderating panels that dealt with technical and not always easy topics. You made the panellists feel very comfortable on stage, you managed to keep the audience interested and us in the back relaxed and assured that everything would go well. Your positive spirit, uncomplicated and friendly nature were highly appreciated!"  Naga was host and moderator for The International Atomic Energy Agency's Scientific Forum, Vienna -

"You were amazing. We were over the moon with how you delivered the stage presentations and thanks for all the scripting you were involved in, not to mention playing golf with us afterwards."   Naga chaired and facilitated the Positive Solutions National Forum

Co-presenter on Breakfast on BBC1 in the mornings. She previously presented The World Today on BBC World. Newspaper credits include financial columns in the Observer and Evening Standard. Has hosted a range of conferences for us around the world, for leading companies and NGOs.