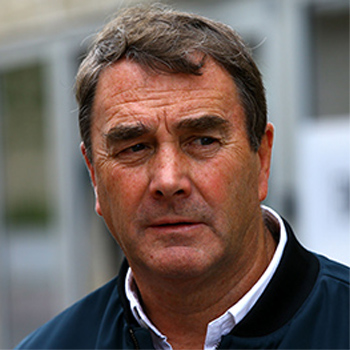 No driver fought harder to get into Formula One racing and few fought harder when they got there. Hugely determined, immensely aggressive and spectacularly daring, he was one of the most exciting drivers ever. With his win or bust approach - 31 wins and 32 crashes - he became the most successful British driver and ranks third in the world in fastest laps, fourth in wins and fifth in poles. With the Union Jack on his helmet and a chip on his shoulder, he was both quick and controversial. His personality made him some enemies; his heroic performances made him millions of fans. Nigel Mansell was a driven man and it showed.

Nigel Mansell first drove a car in a nearby field at the age of seven. That same year he watched Jim Clark in a Lotus win the 1962 British Grand Prix at Aintree and decided then and there to emulate the great Scot, an ambition no doubt entertained by countless other small boys. Few of them would have persevered through Mansell's many misfortunes.

After considerable success in kart racing, he become the 1977 British Formula Ford champion, despite suffering a broken neck in a testing accident. Doctors told him he had come perilously close to quadriplegia, that he would be confined for six months and would never drive again. Mansell sneaked out of hospital and raced on. Three weeks before the accident he had resigned his job as an aerospace engineer, having previously sold most of his personal belongings to finance his foray into Formula Ford.
Next, Mansell and his loyal wife Rosanne sold their house to finance a move into Formula Three. In 1979 a collision with another car resulted in a huge cartwheeling crash he was lucky to survive. Again he was hospitalised, this time with broken vertebrae in his back. Shortly after this, stuffed with painkillers and hiding the extent of his injury, Mansell performed well enough in a tryout with Lotus to become a test driver for the Formula One team. In his Formula One debut, at the 1980 Austrian Grand Prix, a fuel leak in the cockpit left him with painful first and second degree burns on his buttocks.

Mansell became very close to Lotus boss Colin Chapman and was devastated by his sudden death in 1982. He stayed with the team for two more years, then moved to Williams in 1985. Near the end of that season, having no victories to show for 71 Grand Prix starts, Mansell suddenly blossomed into a prolific winner, starting with the 1985 European Grand Prix at Brands Hatch, where he wept on the podium. In a span of 18 months he won 11 races, yet lost out on two World Championships he was poised to win. In 1986 a burst tyre in Adelaide destroyed his season at the last possible moment. In 1987 it was a serious qualifying accident at Suzuka that injured his back again (a spinal concussion) and handed the title to his hated Williams-Honda team mate Nelson Piquet (who called Mansell "an uneducated blockhead" and took verbal shots at Rosanne). For Mansell (who never physically attacked Piquet as he had Ayrton Senna after they collided at Spa), the highlight of 1987 was his scintillating late race charge to beat his least favourite Brazilian at Silverstone. Mansell was simply unstoppable, setting lap records 11 times in the final moments as he reeled in the other Williams. On his victory lap, as thousands of patriotic fans in the feverish grip of 'Mansellmania' flooded onto the track, their hero stopped to kiss the tarmac at the spot where he'd overtaken Piquet at 180mph.

Mansell thrived on adversarial situations, using them to fuel his motivational fires, and if they didn't exist he seemed to go out of his way to create them. His 'me against the world' mentality caused conflict. At Williams, Patrick Head said "he thinks everybody is trying to shaft him at all times" and Frank Williams called him "a pain in the arse". The media also tired of Mansell's chronic complaining. But the fans loved him for the pure, palpable aggression with which he raced. Even that wasn't enough to overcome the deficiencies of the Judd-engined Williams cars in 1988 and when an opportunity arose at Ferrari Mansell seized it with both fists.

His 1989 debut with Ferrari began with a win in Rio and throughout the season he flogged his Ferrari for all it was worth, endearing himself to the fanatical Italian tifosi who called their moustachioed British hero 'Il Leone' (The Lion). At the Hungaroring, where overtaking is supposed to be impossible and where he had qualified a seemingly hopeless 12th, Mansell stormed through the field, scraped past Senna's McLaren in a breathtaking manoeuvre and won the race. In 1990 the wheels came off Mansell's Ferrari bandwagon when Prost became his team mate and out-manoeuvred him politically. At Silverstone the 'British Bulldog' theatrically threw his gloves into the adoring crowd and announced he was retiring at the end of the season. A couple of months later he made a U-turn and announced he was returning to Williams. In 1991 he won five times in the Williams-Renault but lost out on reliability to McLaren's Senna, who took the title. The next year Mansell dominated, winning nine of the 16 races in his Williams-Renault FW14B, but shortly after he was declared the 1992 World Champion he again announced his retirement. His grievances with Williams included a dispute over money and anger that the despised Prost might be his 1993 team mate. Williams offered a last-minute incentive of whatever conditions he wanted but Mansell stalked off to IndyCar racing in America, where he immediately dominated, even on the unfamiliar high speed ovals, and became the 1993 IndyCar champion.

In 1994 Williams persuaded him to return for the final four races, the last of which, in Australia, he won in stunning fashion from pole position. The next year he raced twice for McLaren but decided the car wasn't up to his speed. So, after 187 hard races in 15 tumultuous seasons, 41-year-old Nigel Mansell left Formula One racing for good.
He retired a rich man, operating several business enterprises, including a Ferrari dealership and a golf and country club (he played golf to a professional standard) to live the good life with his wife Rosanne and their three children.
Read More