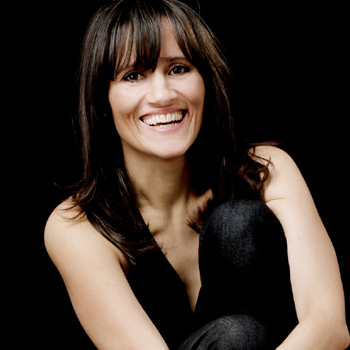 Nina shot to fame by winning the BBC New Comedy Award  in her first year as a comic and is possibly best known for her 'sidekick' Monkey and has gone on to win numerous comedy awards for her writing, acting and ventriloquism.
Nina regularly headlines at UK and London comedy venues, and has appeared at The Comedy Store and Soho Theatre. She is also a regular at international comedy festivals, such as the Edinburgh Fringe Festival,  Melbourne International Comedy Festival and the Montreal Comedy Festival.
Nina took her first solo full length show, Complete and Utter Conti to Edinburgh in 2007, which went on to win the prestigious BARRY Award in 2008 at the Melbourne Comedy Festival. Her next show was  was Evolution, which premiered at the 2008 Edinburgh Festival and proved to be a massive sellout and was followed by Talk to the Hand which introduced new characters including Grandma, a wise Owl and alcoholic American lush....we say American, alhtough she tries out various voices during the evening including Nina's own!
Her radio work includes the Sony Awards winning  Claire in the Community, and Sneekiepeeks, a radio comedy by Harry Venning and Neil Brand about a team of inept, backstabbing surveillance operatives.
TV credits are numerous and include Mock the Week, Comic Relief  and Single (ITV 1) in addition to the  BAFTA-winning Black Books (Channel 4).
Nina and Monk portrayed a morning weather team on the fictional “Wake Up L.A. in Christopher Guest's 2006 film, For Your Consideration. They also appeared in Alan Freestone's low-budget film, Peacock Season, about the Edinburgh festival and has recentlymade her directoral debut with Her Master's Voice at the SXSW Film Festival in Texas.
Nina is an experienced and popular act on the corporate circuit. She has performed after-dinner cabaret with Monk for clients as varied as Nokia, Vitesse Media, AAH Pharmaceuticals , Jardine Lloyd Thompson, Incisive Media, the DRP group, and Euromoney, not to mention countless individuals' private parties. Nina's sophisticated intelligence and playful style suits a wide range of corporate audiences, and Monk can be as clean or as rude as each client wishes!
"Nina was fantastic on Saturday after her performance, everyone was raving about her so she definitely has a few new fans to add to her list! Chaucer would highly recommend her for any event."  Nina entertained after dinner at Chaucer's Christmas Party - December 2012
"Nina was a hit...we had a few technical issues which she took in her stride and covered them so well with Monk, everyone was convinced it was deliberate!" Constructing Excellence Awards
"Thank you so much for sorting out Nina at such short notice. She was absolutely hilarious! Graham Souness was on top table, and thought she was the funniest act he's ever seen; he laughed so much we were concerned he might have a seizure!" Mike Osman, former Capital Gold Breakfast show host

Modern ventriloquist and stand up, who has a host of puppets including old favourite Monkey. Absolutely brilliant, great fun and a bit different.