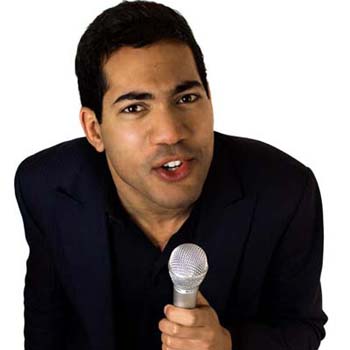 Fresh from a national tour supporting Russell Kane, various TV appearances, and presenting for Radio 2, Omar Hamdi is ˜just what the comedy scene has been crying out for‘ (Daily Telegraph).
Omar Hamdi is a high-energy, affable and delightful Welsh-Egyptian comic who makes the personal political and the political personal, charming his audiences with his boy-band hair, jittery nervous energy, overdramatic stereotypes and huge issues with his emotionally distant father.
Omar took his brand new show 'In the Valleys of the Kings' to the 2015 Edinburgh Fringe Festival, and is headlining at clubs around the UK and overseas.
His intelligent yet accessible act delivers non-stop laughs from culture clashes, media and social commentary and personal political insights.
Brought up by his Egyptian mummy in deepest Wales, Omar's childhood was full of mysteries: How did men ruin everything? What's love? Why's depression such a downer? Almost entirely constituted of energy, enthusiasm and wit, Omar excavates the mummy issues of the lesser-spotted Egyptian-Welshman.
Omar's credits include appearances on Seann Walsh's Comedy Spectacular and Free Speech (BBC Three), regular Radio 2 appearances, and Philosofa (podcast).
"Smashed it like a ceramic plate, every night of the tour"   Russell Kane
Read More