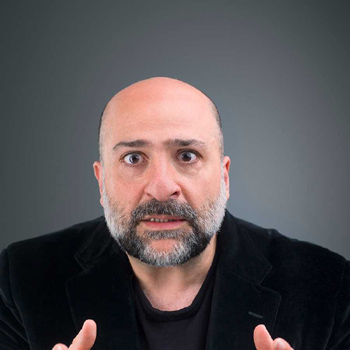 HEADLINE: Omid has released an unofficial World Cup Anthem in aid of the Bobby Moore Fund. See the video on YouTube and buy it on Amazon! Only 99p and all money raised goes to the fund.

Iranian stand-up comedian and actor.Omid Djalili is one of the funniest, freshest and most original comedians in Britain.

After great success at the Edinburgh Festival in 1995 Omid has become a Festival Fringe favourite and has had a string of sell-out legendary shows to his name.  From the 'Short Fat Kebab Shop Owner's Son' Omid's shows have included the 'Arab & The Jew' , 'Omid Djalili Is Ethnic', 'Warm to my Winning Smile', 'Behind Enemy Lines' and 'No Aggenda' all of which toured nationally after first becoming Edinburgh's hottest tickets. Omid's 2013 comedy show is his hit 'Tour of Duty'.

An award winning stand-up comedian Omid's awards include the Time Out Award for Best Stand Up and the EMMA Award. He has also been a South Bank Award nominee and a Perrier Award nominee.
Omid won the Best Actor Award for his lead performance in 'The Infidel' at the Turin Film Festival. The Infidel also picked up a Loaded LAFTA award for funniest film. and Omid was short listed for the Peter Sellers Award at the London Evening Standard British Film Awards. Omid has also starred in the hit films Gladiator, The World is Not Enough, Spy Game and the Mummy.
'Right now, the Iranian Djalili is probably one of the most subversive, let alone funniest, comedians around.'  The Guardian