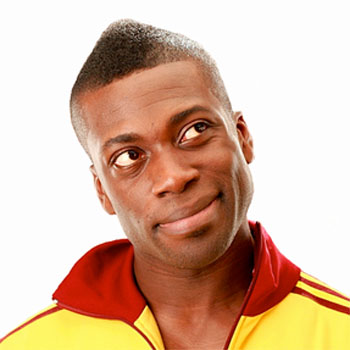 Ortis Deley; British TV presenter, radio DJ and actor. After over 20 years of television presenting Ortis has become a familiar and popular choice.

Ortis can currently be seen presenting Channel 5′s The Gadget Show and Police Interceptors. He spent 10 years at CBBC hosting everything from Shortchange to Live & Kicking.

Ortis has filmed some reports for BBC1’s The One Show, hosted his own dating show The Love Quest for Facebook and has even had his own Sunday Breakfast slot on London’s Capital Xtra nee Choice FM.

Ortis began his career presenting shows for TCC, then became a main host for Trouble TV before progressing on to BBC1, hosting Shortchange, Why 5, and Making It. From this he went on to present various CBBC shows including X-perimental which was perfect for him with his science background.

Ortis has a BSc (Hons) degree in Pharmacy which helped him win the role of presenting a one-off special for Tomorrow’s World and also a guest presenting spot on Watchdog for BBC1.

Ortis is passionate about all things sport, especially athletics.

Because of his vast presenting experience he is often asked to host award ceremonies and over the years has commanded the British Academy Children’s Awards – for which he has received two Best Presenter nominations, and The People’s Choice Black Music Awards.

Not limited to television presenting, as an actor, Ortis was seen in a cameo role in the feature film Derailed, alongside Clive Owen and Jennifer Aniston. He also played a featured role in Noel Clarke’s cult British movie Kidulthood.

Ortis Deley is a British television presenter, radio DJ and actor. As of 2016, he is a presenter on The Gadget Show.