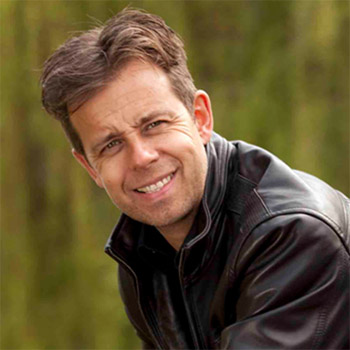 Pat presented his first daytime show in 1982 for BBC Radio 1 when he was just twenty. Following a year on air, plus numerous 'Top of the Pops' TV appearances, he went on to host mid mornings at 95.8 Capital FM for a decade. Along the way he picked up a gold Sony award whilst also notching up seven hit singles and raising over £300,000 for charity as part of the infamous Stock Aitken Waterman duo 'Pat & Mick'. He then took his mid-morning slot to No1 again, as part of seven successful years at London's Heart, becoming the only presenter ever to rate No1 on mid mornings in London on two different stations.
Pat Sharp presents the syndicated show 'The Weekend Vibe / All The Hits' which airs across the UK and around the world. His radio shows have also been broadcast on BFBS for our troops worldwide, and as in-flight programmes on Swissair, Sabena, Britannia Airways and Oman Air.
Pat's main radio shows are broadcast nationally across the UK where he hosts Smooth Radio's daily afternoon show.
On TV Pat hosted ITV's ' FunHouse ' for 12 years and was also the host of Sky Channel's first pop video shows (Skytrax) shown across Europe in 40 million homes throughout the 80s.
He won the DJ edition of 'The Weakest Link' raising £13k for charity. He appeared on Channel 4's 'The Games' and has starred in 'Celebrity Come Dine With Me' and 'Never Mind The Buzzcocks'.  He had a cameo role in 'Superman Requiem' released in 2011.
In 2011 he participated in 'I'm A Celebrity Get Me Out of Here' and memorably competed with Fatima Whitbread in one of the most gruelling Bush Tucker trials ever. More recently he has appeared on Eggheads, Coach Trip, Live With Gabby, The Wright Stuff,  Big Brother's Big Mouth,  Britain's Got More Talent and  Pointless.
His classic kids TV show FunHouse is currently re-running on Sky, Friday nights Challenge TV and has acquired a cult following.
Pat hosts many live PA's across the UK, from corporate events to DJ sets.
Read More