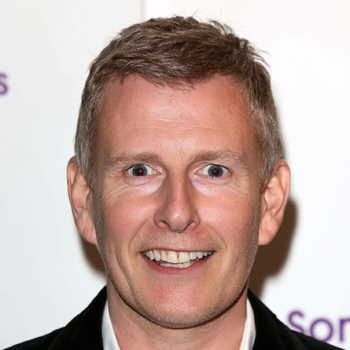 Born in 1971 in Dundrum, Northern Ireland, Patrick began his stand up career whilst studying psychology at Queen's University Belfast and quickly made a name for himself as the host of Northern Ireland's first comedy club The Empire Laughs Back.

His fearless satirical routines, in which he regularly attacked both Republican and Loyalist paramilitaries, drew praise from both critics and those on the streets of pre ceasefire Belfast, not least because he himself had lost his father to loyalist gunmen.

The BBC picked up on his ability to provoke and charm in equal measure, and his big break came in 1995 with Comic Relief's St Patrick's Day Stand Up Special alongside Ben Elton and Jo Brand.

Channel 4's Last Chance Lottery and "Fame Academy" made him a household name. His BBC1 chat show Patrick Kielty Almost Live hit the screens in 2002 and ran for six seasons.

In 2006 he returned to stand up. A sell out UK tour and a best selling DVD Patrick Kielty Live confirmed him as one of Ireland's most successful comedians.  The following year he headlined BBC1's Live at The Apollo with Joan Rivers.

Patrick made his acting debut in A Night in November at Belfast's Opera House.  It was a role that charmed critics and audiences and a transfer to London's West end quickly followed in 2008.

More recently he has become a regular voice on BBC Radio 2 as well as fronting both their BBC New Comedy Awards and live New Year's Eve Special Stomping at The Savoy.

Patrick has featured on his own 'One Night Stand' for Dave and topped the bill a second time on Live at The Apollo.  He has also hosted CH4 series Stand Up for the Week and fronts the BBC New Comedy Award on Radio 2 where he is a regular host.

Patrick presented Sport Relief in 2010 and 2012 alongside Fearne Cotton.  For Sport Relief he scored a win for Team Bishop in the Clash of the Titans synchronised swimming event, with his superb lift!