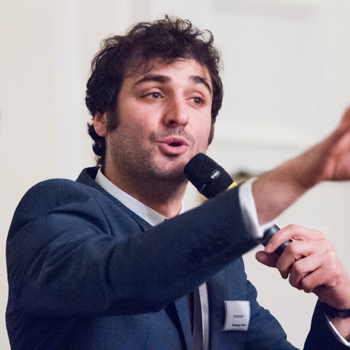 Audience favourite Patrick Monahan blends a high energy comedy style with hilarious and engaging topical and observational material. Known for working a room, Patrick is adored by his audiences with whom he makes an effortless connection!

From February 2016 the family’s favourite funnyman (and occasional disco dancer) is on tour across the UK with his brand new stand-up show The Disco Years! Charged by Patrick’s memories and reminiscences of being an immigrant to Great Britain, this is a laugh out loud show that is both thoughtful and smart as well as brilliantly silly!

Early in 2014 Patrick took part in the hit family entertainment series ‘Splash!’ (ITV) and appeared on the brand new series of ‘Celebrity Squares’ (ITV). He was also seen on ‘Fake Reaction’ (ITV) and on ‘Man Up’ (Fox) and was a regular 2014 guest on ‘Not The One Show’ (London Live). Last year Patrick could be seen as host of ‘Jongleurs Live!’ (Sky) and on ‘12 Again’ (CBBC/BBC2).

In 2012 he took part in Let’s Dance for Sports Relief on BBC, won Best Newcomer at the Loaded LAFTA Awards and Forth Radio Best Stand-Up People’s Choice Award for his hit show ‘Hug Me I Feel Good’.
Winner of the 2011 ITV1 series ‘Show Me The Funny’ which led to the release of his debut DVD ‘Patrick Monahan Live’ (2 Entertain).

Patrick is also a regular MC and headlining act at the top London and UK comedy clubs and in addition to this he is in huge demand on the corporate circuit as an after dinner speaker and awards host.

"Just wanted to drop you a line to say Patrick was brill. I think he is the best host I have had at any of my awards. Loved the crowd engagement. Have had lovely feedback from guests and he was a pleasure to work with!"
Patrick hosted a financial awards in the City, September 2017

Thanks again, Patrick went down really well. I will highly recommend Patrick." October 2014
"Patrick was Fab a real nice guy, went down really well with the crowd and made the evening! Everyone left with big smiles on their faces."  Chartered Institute for Securities and Investments, Jersey - March 2014
"Thank you most sincerely for your important contribution as guest presenter...Your handling of the announcement of the awards was brilliant and your solo act went down very well indeed...Very many thanks for your contribution to the success of the 2013 Nisa Exhibition Dinner & Awards Presentation."  Corporate Events Director, Nisa - April 2013
"He was tremendous, very funny and very well received, lovely bloke too"  Patrick hosted an awards for the Mobile Industry in November 2012
"Thanks again for last night, everyone I've spoken to has commented on how great you were and how you really pulled the crowd into the ceremony & got them involved.  You were a pleasure to work with."  Patrick entertained at and hosted the Insurance Fraud Awards - October 2012
"Just wanted to let you know that Patrick was fantastic last night, he went down a storm." Patrick entertained and presented awards at the Renault Trucks Network Conference - February 2012

'He has the dark looks and stubble of the Middle East, married to the charm of the Irish and the sense of fun of the Teessider. Omid Djalili meets Dave Allen you might say.'  Daily Mail