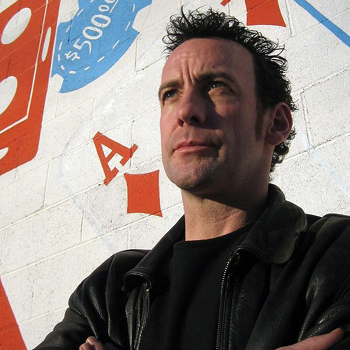 Britain's oldest juvenile delinquent, Zenon has spent a lifetime dedicated to deceit, pulling off his first sting aged just eight by selling fake raffle tickets to the residents of his street for a non-existent prize. He skived off school to make his first stage appearance aged eleven, his first TV appearance aged fifteen and, as a teenager, he spent every summer working in a Blackpool joke and magic shop, the House of Secrets, with his lifelong friend and mentor Bill Thompson. Evenings were spent performing in promenade hotels and guest houses, and this seaside period probably accounts for his fascination with bizarre entertainments; sideshows, freakshows and the like, and a dress sense reminiscent of a fairground waltzer operator.

Aged eighteen, Paul travelled the Greek Islands for six months working as street magician, fire-eater and phony fortune-teller ("I can see travel over water¦", etc). He returned to the UK after a short spell working as a casino croupier in Scandinavia where he was fired for cheating (allegedly), and began performing in summer season shows and comedy clubs including the renowned London Comedy Store. He went on to host tours (acting as deterrent) for the British and U.S. Forces in locations as far afield as Belize, Bosnia, Croatia, Germany, Gibraltar and the Falkland and Ascension Islands, performing in venues ranging from tents and tin huts to the backs of lorries and the hold of an aircraft carrier.

In the early Nineties, Paul presented four series of children's programmes - Tricky Business and Tricks 'n' Tracks - on BBC1, was a regular guest on shows including What's Up Doc? on ITV, produced and presented Magic You Can Do, a teach-yourself-magic videotape, and he was the creator, writer and associate producer of Crazy Cottage, an ITV gameshow which reached number one in the ratings in each of its three series. Like most ex-children's presenters, he now hates kids.

In the late Nineties Zenon pioneered what has now become known as 'street magic' in a series of ground-breaking TV shows (some of which were among Channel 4's highest-ever rating specials), where he honed a cutting-edge contemporary style, the influence of which is readily apparent in the current crop of magic-based television shows. He continues to appear in various guises on numerous television shows across every genre, including as regular special guest in Dictionary Corner on Channel 4's Countdown. Other recent shows have included The Story of Light Entertainment on BBC2, and Paul Zenon's Revenge Squad and White Magic with Paul Zenon, both screened on ITV1. In recent years, Paul's shows have had sell-out runs at the Edinburgh, Brighton, Adelaide, Melbourne and Auckland festivals, where he has also been a regular in the celebrated burlesque show La Clique at the Famous Spiegeltent.

The majority of Paul's live work for many years now has been in the corporate sector, where he is widely acknowledged as one of the leading after-dinner entertainers, performing and presenting at prestigious conferences and events worldwide. During the past few years, in addition to Europe, he has appeared in Australia, Argentina, Dubai, Kuwait, Hong Kong, Manila, Mauritius, Marrakesh, New Zealand and Tokyo.

Paul is the author of the best-selling 100 Hundred Ways to Win a Tenner (available in the US as 100 Ways to Win a Ten-Spot), Paul Zenon's Dirty Tricks and Street Magic, all published by Carlton Books. He is an experienced pundit and dedicated sceptic with regard to matters 'paranormal' (ghosts, astrology, crop circles, UFOs, psychics, faith healing, cryptozoology, etc.) and also a leading expert on the subject of scams, swindles and conmen, pranks and hoaxes.

Paul is the founder of The Wonderbus,a not-for-profit organisation, the intention of which is to take older people on days out to see live entertainment, whether they want to or not.