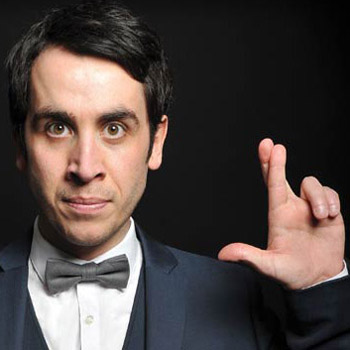 Pete Firman is the UK’s leading comedian/magician and a TV regular, most recently seen on ‘The Next Great Magician’ (ITV1), ‘Tonight at the London Palladium’ (ITV1), ‘Let’s Sing & Dance for Comic Relief’ (BBC1) and Tommy Cooper Forever (ITV1).

Pete first graced our screens in Channel 5’s groundbreaking series ‘Monkey Magic’ and later starred in BBC1′s prime-time Saturday night series ‘The Magicians’. His unique blend of comedy and magic has seen him invited to perform on countless TV programmes, including ‘The John Bishop Show’ (BBC1), ‘The Sarah Millican Television Programme’ (BBC2), ‘Edinburgh Comedy Fest Live’ (BBC3) and ‘The Magic Show Story’ (ITV1) amongst many others.

His BBC Radio 4 documentary, ‘Pete Firman’s World of Magic’, aired to critical acclaim and he has given several interviews for TV retrospectives, including How Magic Changed TV (Channel 5) ’50 Greatest Magic Tricks’ (Channel 4) and ‘When Magic Tricks Go Horribly Wrong’ (Channel 5). Pete’s skills as a magic consultant are also in demand, most recently on the Edinburgh production of ‘Five Guys Named Moe.’

Pete also wrote ‘Tricks To Freak Out Your Friends’, a beginners magic book for the 21st century, which was so successful in the UK that it was also released in the USA and is about to go into i’s second print run. He has also written numerous articles on magic for publications such as The Guardian, The Scotsman and Time Out London.

Live performances have taken him all over the world and his one-man shows have entertained sell-out audiences for 10 years in a row at the Edinburgh Fringe and on several UK tours. He’s been invited to perform at Montreal’s prestigious Just For Laughs festival, Hollywood’s famous ‘Magic Castle’ and London’s home of mystery, ’The Magic Circle.’ Other UK theatre productions include ‘Champions of Magic’, ‘The All-Star Stand Up Tour’ and ‘Sandi Toksvig’s Christmas Cracker’.

Pete is available for corporate and private engagements. From Claridges in London to The Intercontinental Hotel in Hong Kong, Pete’s unique and engaging style has made him one of the most popular and in-demand performers in the corporate market.

His after dinner show includes world class comedy magic and audience participation, which is very often tailored to the specific event. The performance can vary in length depending on the client’s requirements.

He is also the ideal awards host.

“Pete was a pleasure to work with, very professional and easy to talk to. His performance blew our audience away and kept them entertained following their tour – giving the evening a great atmosphere. I would have no hesitations in recommending Pete for future bookings.”

“Pete was professional, easy to work with and extremely entertaining. It’s a tricky crowd as they are very busy talking amongst themselves!! He got their attention instantly and held it throughout. He also managed to judge the audience well. The feedback has been very positive.”

“Pete is one of the most professional entertainers we have ever had at an event. His cheeky, fast paced (but not offensive) humour, had the audience roaring with laughter. On top of that, he was an absolute pleasure to deal with. We would not hesitate to book him again.”

“Pete followed our brief exactly. He was punctual, professional, and read our audience brilliantly. Pete went down a storm with the audience. He was very funny and just the right balance of cheek for a corporate crowd. I would have no hesitation in recommending him to other corporate groups.”

“We hired Pete for 2 separate awards evenings in different sectors and he went down brilliantly on both occasions. Pete is lively, engaging, professional, and of course funny. He was very easy to work with and I wouldn’t hesitate to recommend him for a function where you are looking for comedy with a twist.”

“Please may you pass on my HUGE thanks to Pete, he is such a lovely person to work with and did an amazing job on stage at the WellChild Awards last night. We really appreciated him attending and performing, it makes such a difference to the evening and makes it one that all our fantastic and inspiring winners will never forget.”

“To say we were spellbound by Pete’s tricks is an understatement. He left a stunned impression of everyone’s face as they desperately tried, in vain, to comprehend what they’d just witnessed.”

“Pete truly brightened the party. It’s always hard when you have very diverse guests, but magic seems to be the ultimate ice breaker. He was an absolute pleasure, we hope that we’ll work with him again in the near future!”

“Pete Firman was amazing, a true gentleman … he was a joy to deal with.”