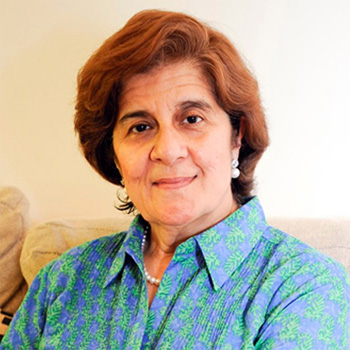 Pinky acts as development consultant with some of the major food companies in Europe including Sharwoods, and advises on a range of Indian food products stocked by Sainsburys and Tesco.

Pinky shares her passion for Indian food with the hundreds of people who attend her Spice Magic corporate seminars and private parties in London on the art and techniques of Indian cuisine. She has starred in a TV series on Indian food, appeared on Open House with Gloria Hunniford and on Good Food Live.

Her first cookery book Spice Magic besides including popular recipes, surveys the influence of history, culture, geography and religion on the food habits of India. It is an indispensable guide for anyone who has ever wanted to unlock the secrets of authentic Indian cooking. She published and launched the book in 2001, promoting it by holding culinary demonstrations in shops with her multi-purpose cooker.

The Asian Women of Achievement Awards, of which she is Chairman, was her brainchild. The Patrons of the Awards are Cherie Booth QC and Her Highness Begum Inaara Aga Khan. It is an annual event held in London to acknowledge the achievements of Asian women.

She is a mentor with the Prince's Youth Business Trust, a member of the Asia House special project committee, the Mayor of Croydon's charity committee and the European Women of Achievement Awards. She helped to set up the Women's Interfaith Network to encourage communication and understanding between women of different faiths.

In 2004, Pinky was invited to demonstrate 'Cooking with spices' at the V&A 'Encounters' exhibition, focusing on the meeting of Asia and Europe 1500-1800.

In 2005, she was honoured to judge the following events:

She regularly takes part in discussions on the radio and is also an after-dinner speaker Â­ her specialist subjects besides food are success, communication, motivation and inspiration.

A committed Muslim, Pinky was born in Calcutta and came to Britain in 1977 after a three-week whirlwind romance in Mumbai, where she was introduced to and married her businessman husband. Wanting to be self-employed and yet have the flexibility for a family (she has two adult sons), she started a consultancy in the Indian food industry teaching companies to produce more authentic products by telling them stories about India and its culture. Run from her home and spurred on by her expertise, the reputation of her business has spread by word of mouth.