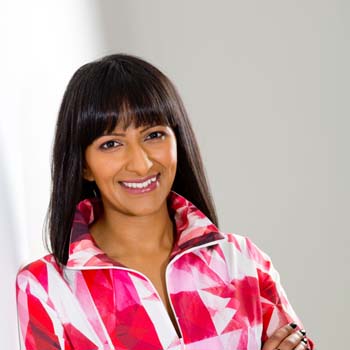 Ranvir started her career at the BBC in local radio as a bulletin producer and reader, then moved to reporting, and by the time the Manchester Commonwealth Games came around in 2002 she was in the thick of it, presenting live programmes every morning from around the city.
A screen test for regional TV beckoned soon after, and Ranvir quickly became a very well known face across North West England, co-presenting the daily evening show, which she did for four and a half years.
Alongside this, she was a regular voice on BBC Radio 5 Live, presenting almost every show going, from breakfast with Nick Campbell to drive with Peter Allen, and the late night phone ins.
In 2012, ITV came knocking, and the prospect of working on national and international news everyday, and interviewing the main players on live television, was far too tempting to resist. ¨¨She is now a regular face on the network, and no stranger to early starts thanks to Good Morning Britain.
Her most memorable moments so far have been reporting ahead of the G20 from Sierra Leone's slums, appearing on the University Challenge Christmas special and meeting Kermit.
Read More