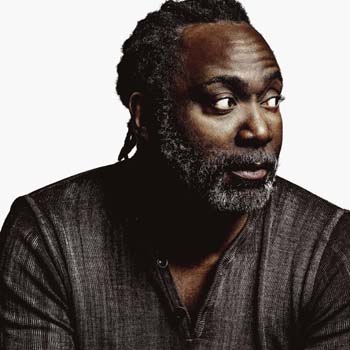 Frequently described as the coolest man in comedy, Reginald D Hunter has become an established headline act. His powerful, straight-talking approach, coupled with his unique brand of social commentary presented in his warm and languid style, has won him awards, acclaim and a fast-growing reputation.
Reg escaped small-town Georgia, USA to pursue his acting dream. He came to the UK to study at RADA and found himself dabbling in Shakespeare and panto.  But while faced with life as a struggling actor, he discovered his true calling was comedy.
A regular performer at the Edinburgh Festival Fringe since 2002, Reginald's career has led to him being invited to perform in venues the world over in places such as Singapore, Hong Kong, Thailand and South Africa. He is one of the few performers to have been nominated for the Perrier Award in three consecutive years.
He is a well-known face on primetime television shows such as '8 Out Of 10 Cats', 'Never Mind The Buzzcocks' and 'QI' and is a frequent guest on 'Have I Got News For You'. He has recently finished starring alongside Andy Hamilton in BBC4's 'It's Only A Theory' and has appeared on 'The Bubble', 'The Jonathan Ross Show' and the hugely popular 'Live At The Apollo' (all for BBC Television)
'Reginald D Hunter Live 2010' is Reginald's debut DVD release and will be recorded during his 3-date run at the Shepherd's Bush Empire in London.
One of the most charismatic comedians around, Reg also has natural ability to take an intelligent, sideways look at people and relationships. He is one of a very select group of comedians to be nominated for the Perrier Award three years running.
'He shimmers with stage presence and his comic timing is sharp enough to burst balloons.' Independent
'Few acts nestle a crowd in the palms of their hands quite like this¦comically astute, rewardingly provocative.' Times