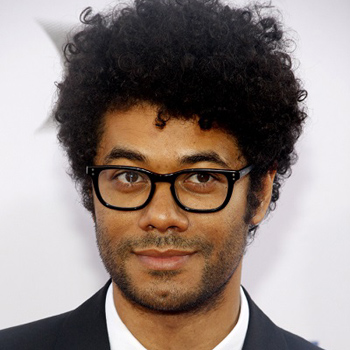 Richard Ayoade is an actor, comedian, writer, director and television presenter. He is best known as Maurice Moss in The IT Crowd – for which he won the 2014 BAFTA for Best Male Comedy Performance,  as Dean Learner in Garth Marenghi's Darkplace and as the presenter of Channel 4's Crystal Maze.

He was born in Hammersmith, and grew up in Suffolk, the son of a Norwegian mother and a Nigerian father. He studied Law at Cambridge university and, like so many legends of comedy including Eric Idle, Hugh Laurie and Graeme Garden, became the president of the Cambridge Footlights.

Richard's first big break in television was as a director, co-writer and actor in the cult classic Darkplace (2004) a parody of 1980's science fiction television shows.

He has directed films including Submarine (2010) and The Double (2013), as well as many music videos for bands including Arctic Monkeys, Vampire Weekend, Yeah Yeah Yeahs and Kasabian.

Richard Ayoade has often worked alongside Noel Fielding, Julian Barratt, Matt Berry, and Rich Fulcher in shows like The Mighty Boosh. He has been a team captain on the panel show Was It Something I Said?

His book Ayoade on Ayoade was published by Faber & Faber in 2014.