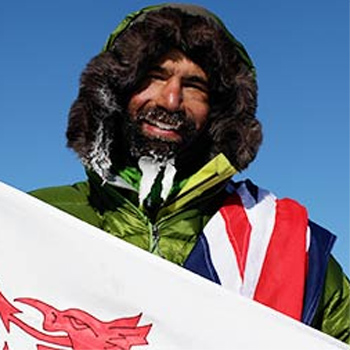 Using his experience and knowledge from making the transition from the high performance sport of rugby to pioneering world first expeditions, Richard is in great demand for his presentations, keynote speeches and for workshops.
Richard's expertise is ideal for engaging or motivating staff, developing resilience or working through transition.  His world class keynotes are inspiring and his unique approach and humility are highly respected.  Richard's passions are Performance and People.
Richard has worked with brands such as John Lewis, Admiral, Pfizer, Bank of America, Airbus and Playstation and with organisations including The Institute of Directors, Visit Wales and the Million Dollar Round Table.
Having lived two lives of high performance - one as an international rugby player and one taking on the challenge of expeditions to some of the world's most inhospitable and hostile environments, Richard has shared his insight and lessons learned with the Welsh Rugby Union, England Rugby, UK Coaching, The International Sport Science and Sport Medicine Conference, The University of South Wales and Wales' most successful Commonwealth Games Team.
He also has a profile as a television personality, delivering programmes for the BBC and Channel 5 about his expeditions.
Richard has been responsible for increasing participation and improving elite performance in sport in Wales and is an ambassador to the Welsh Government and Champion of Wales‘ Year of Adventure 2016.
"Your inspirational presentation truly touched us all and even brought one or two of us to tears! You really do demonstrate the true meaning of teamwork, endurance and benevolence.  Taking us with you on your journey through the trials and tribulations of your 737 challenge and what it meant to you, your family and your team, was the highlight of the day and this was reflected in the feedback from all participants."  Chief Executive, Newport City Homes Housing Association. Richard gave a motivational speech at the Newport City Homes AGM - July 2013
Read More