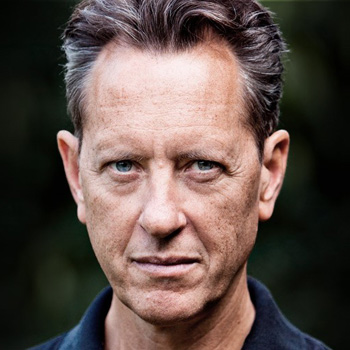 Actor, screenwriter, writer and director Richard E Grant was born in Swaziland. His father was the last minister of education in the then British colony before its independence in 1968.
Richard studied English and drama at university in Capetown, South Africa and was a member of the Space Theatre Company in Cape Town before moving to London in 1982.
The initial E in his name came about because there was already a Richard Grant registered with Equity. Richard was born Richard Grant Esterhuysen, so he added the E. to his name.
He came to public attention in 1987 for playing Withnail, the inebriated title character, in the film 'Withnail and I' and achieved international recognition as John Seward in the 1992 blockbuster film of Bram Stoker's 'Dracula'.
Richard began appearing in Hollywood films and quickly established himself as a powerful character actor in a wide array of films, from blockbuster studio movies to small independent projects. Over the past twenty years, he has had strong supporting roles in Henry & June, L.A. Story, The Player, The Age of Innocence, The Portrait of a Lady, Spice World, Gosford Park, Bright Young Things, and Penelope.
His book 'With Nails: The Film Diaries of Richard E Grant' was published in 1997.
He wrote and directed the 2005 film 'Wah-Wah',  loosely based on his own childhood experiences. The film took him over seven years to complete. He kept a diary of the experience which was later published as a book - The Wah-Wah Diaries. The book received positive reviews from critics, many of whom were impressed at the honesty of the tale, especially in regard to his difficult relationship with the producer.
Richard married voice coach Joan Washington in 1986 and has a daughter with her and also a stepson. He is a teetotaller, having an intolerance to alcohol.
Read More