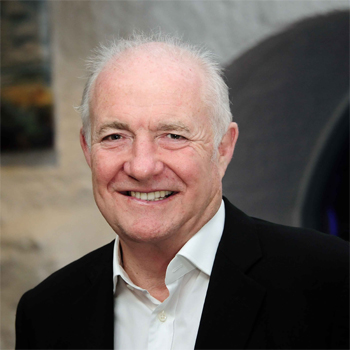 Rick Stein is somewhat misleadingly labelled a 'Celebrity Chef'. In fact, with his ex-wife Jill, he owns four restaurants, a delicatessen, a patisserie, a seafood cookery school and forty guest bedrooms in the small fishing port of Padstow on the north coast of Cornwall, which has developed over the past 33 years. His three sons are all currently working in the business. The main restaurant, The Seafood, was refurbished in January 2008 and now has a new entrance, extra seats and a large seafood bar.

Rick attributes the success of all this to a simple observation "Nothing is more exhilarating than fresh fish simply cooked" It was this enthusiasm for seafood that led him to make his first TV cookery series Taste of the Sea in 1995. Since then he has made nine more. The first five were exclusively about fish and shellfish. In the last of these, The Seafood Lover's Guide, Rick journeyed around the British Isles looking for and finding the best seafood. He spoke to fishmongers and chefs and visited seafood restaurants, fish merchants, oyster beds and kipper smokers. This led him to broaden the search beyond fish to good food generally. He began to look for small producers of excellence who he named his Food Heroes. He made two series in Great Britain and Ireland then set his sights on the food and cooking of France which he discovered on a leisurely voyage down the canals of Southern France on a canal barge. The series, French Odyssey, and the book, which accompanied it, were extremely successful partly because everyone loves rural France from Bordeaux to Marseille and the produce, particularly in the little local country markets, is so good.

Rick and his producer David Pritchard enjoyed making the French series so much that they decided to carry on where they had left off, in Marseille, by setting out into the Mediterranean for a series of Mediterranean Escapes. This latest TV series and book has Rick journeying by ferry and Land Rover through Corsica, Sardinia, Sicily, Puglia, Majorca, Catalonia, Corfu, Eastern Turkey and Morocco asking the question 'what is so special about Mediterranean cuisine?' He finds, in the local traditional cuisines of those countries, food of vibrancy and colour. The series and book are proving extremely popular. His next venture will be in South East Asia, Malaysia, Cambodia, Thailand, and Vietnam, where, again, he will be celebrating the attraction of local food in a part of the world where the cooking is becoming ever better known for its light, healthy, spicy flavour.

All of this represents his philosophy on food, eating and restaurants, which is that cooking and eating together are generous activities, which should be taken seriously but should also resound with joy. All the books and films show a commitment to the quality of food too and a concern for sustainability in fishing and good husbandry in farming.

In the last few years Rick has also been commissioned by the BBC to make a number of one-off documentaries not all to do with food. They include Betjeman and Me - Rick Stein's Story (2006), celebrating the life and work of the much-loved English poet who knew Cornwall well; Rick Stein and the Japanese Ambassador (2006) a programme where Rick went to Japan to learn about Japanese fish cookery and Rick Stein in Du Maurier Country (2007) where Rick paid a personal tribute to the novelist Daphne du Maurier who lived most of her life in his beloved Cornwall.

In a long career as a chef, Rick has cooked twice for Tony Blair at 10 Downing Street, once for the French President Jacques Chirac and, on another occasion, for the Queen and Prince Philip to celebrate the Golden Jubilee in which all her past prime ministers were invited. He was awarded an OBE in 2003 for services to West Country Tourism.

Rick still lives part of the year in Padstow. He misses the company of his small Jack Russell, Chalky, who died, aged 18,  in 2007.

Rick now has a house in Sydney with his partner, Sarah Burns and regards Australia as his second home.