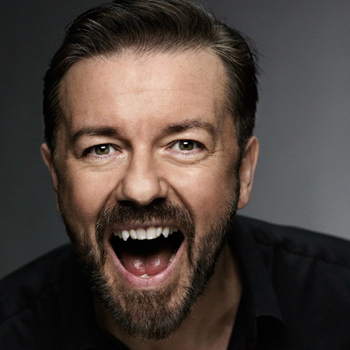 Ricky graduated from London University with a degree in philosophy, he then went onto work at the University as entertainment manager for the university Students Union. It was here that he first started developing material for The Office along with the first incarnation of David Brent, a character called Seedy Boss.

He later took a desk job at London radio station, XFM, where he was later offered his own show. Stephen Merchant worked as his assistant until he went to the BBC to undertake a production training course. As part of the course, Stephen collaborated with Ricky to produce a film set in Ricky's old office that they gave to the BBC.

Ricky went on to be a regular contributor to Channel 4's The Eleven O'Clock Show and was soon presenting his own chat show, Meet Ricky Gervais.

Then came his lead role in The Office, a show which has received huge critical acclaim and a host of prestigious awards including Two Golden Globes, six BAFTAs, four British Comedy Awards and the prestigious American award The Peabody.

Following this huge success he embarked on his first live stand-up tour, Animals, based around his fascination with the animal kingdom. His follow-up stand-up act was called Politics.

Ricky has become the first British person to write an episode of The Simpsons.