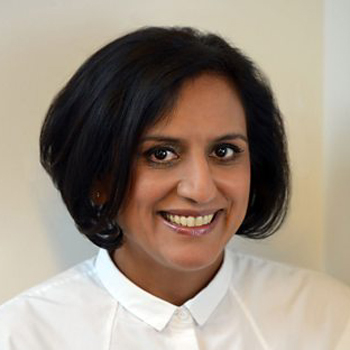 Ritula Shah ignored her father’s sensible advice to become a lawyer, instead, she graduated in History from Warwick University in 1988. Soon afterwards, she joined the BBC in Birmingham and won a place on the Midlands Production Training Scheme.

Ritula worked on a range of TV and radio programmes in the Midlands before moving to BBC Radio 4's Today programme. She produced and edited the flagship breakfast programme for eight years, before joining the BBC World Service in 1999 as one of the presenters of the World Today, a daily news show. She found herself reporting for the programme from a variety of unlikely locations, including a building site at the back of a mosque in Tehran and under a table on a rooftop in Moscow (the only place where the equipment was protected from the snow).

In 2008 Ritula joined the World Tonight, Radio 4’s evening news programme, which has a focus on international affairs. She’s presented the programme from countries including Brazil, Jordan, India, China, the US, Finland and Germany.
She’s also presented Woman’s Hour, PM and is a regular on Any Questions and Any Answers on Radio 4.

In 2011 Ritula was the winner of the Media Professional of the Year at the Asian Women of Achievement Awards and in 2013 she was awarded the GG2 Media and Creative Arts Award.

Ritula is a trustee of the International Institute of Visual Arts and an ambassador for the British Asian Trust.

In her spare time, Ritula is an enthusiastic but hopeless gardener and enjoys yoga and long walks.

"It was fantastic to have Ritula there – she added a great mixture of humour and gravitas to the event and I hope she enjoyed it equally". Accenture 2018