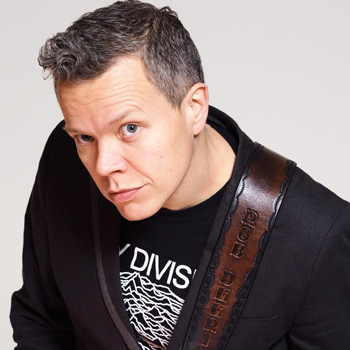 Rob Deering performs stand-up comedy with music, using a guitar, a loop pedal and his voice to create impressive rock and pop soundscapes and do jokes, of course. Along with being one of the most in-demand headliners on the UK circuit, he‘s toured nationally and performed solo shows at the Edinburgh Fringe many times since starting out in comedy in the year 2000. His late-night, live-music pop quiz Beat This is a festival institution. Rob has performed throughout the world, in shows from the Middle East to Melbourne, Shanghai to the South of France, and he has appeared on any number of Radio and TV shows since starting out on 99 Things To Do Before You Die, most recently winning Celebrity Mastermind on BBC One.
Rob also runs. He ran the Virgin Money London Marathon for the third time in 2015. He also won Celebrity Mastermind in 2015.
Perfect for corporate events Rob is hugely experienced at hosting awards as well as performing after dinner cabaret. He can
"Rob was fantastic - very funny and really got the room going. He was also very accommodating of our ideas / requests which we really appreciated. Another success - thanks so much!"  Reapit Summer Party - Sept 2017
Read More

Rob at the Comedy Store