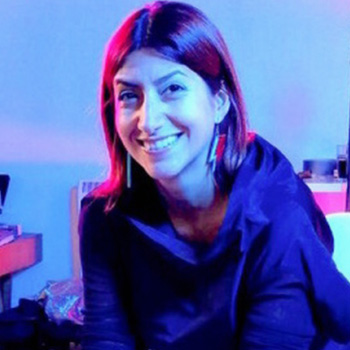 Roberta Lucca spoke at our Speaker Afternoon Tea on 14th May 2018 at the IoD, Pall Mall, London. Details here: https://www.performingartistes.co.uk/events-post/19

Founder and Chief Brand Officer at Bossa Studios (she has over 60 employees, of whom 70% are millenials or Gen Y), she previously founded WonderLuk and BOLDR. She has built and launched over 20 digital/mobile products, games, and brands in the last 15 years. Her forte is to create original products and concepts while inspiring people about making big things happen and being bold every day.

With a Computer Science degree, an MBA and many Arts & Design courses, her brain expanded into balancing spark and creative chaos with a great ability to execute. Business-wise, she's worked in product and innovation within large companies, including Globo TV (the world's largest commercial broadcaster) and Vertu/Nokia.

With a strong team of 60 people based in London, she helped Bossa grow from zero to a multi-million dollar business. Bossa is now amongst the 1% top performing UK startups in terms of annual sales.

Their games are B2C and went viral due to their ingenious growth strategy and were bought by millions of people worldwide. They can be played on the computer, mobile, iPad, Playstation, Xbox and VR.

She was voted as one of the Top 35 Women under 35 by Management Today, Top 30 Women in Games, and was everywoman’s Entrepreneur of the Year finalist.

In 2015, she became a Tech London Advocate to help foster our startups ecosystem, and got listed as Influential Tech Leader on the TechCityInsider’s Almanac. In 2016, her letter of advice to young entrepreneurs was published on the Dear Female Founder book.

As a founder who's succeeded and failed, she loves inspiring more women to shape the future with Tech. She's been actively inspiring them at events she speaks at, TV programmes such as the BBC’s Girls Can Code, Disney’s Minnie Challenge, and through one-on-one mentoring.

She has appeared on the BBC and Sky News and while she and her companies have featured in The Guardian, Evening Standard, Huffington Post, TechCrunch, Management Today, Financial Times, Telegraph and Wired among others.

"Thank you very much for your excellent Breakfast Briefing at Events Events yesterday.  The topic was really key to the delegates, as you saw with so many of them turning up early.  The feedback afterwards was overwhelmingly positive and people really enjoyed your talk and got a lot out of it.  So thanks again!"

Founder of Bossa Studios, a BAFTA winning games studio in London. She has featured in Management Today's Top 35 Women under 35 and employs over 60 people, 70% of whom are millennials. She’s also involved with campaigns to encourage girls to consider careers in Tech. Spoke at our Millennial Afternoon Tea in May ’18.

Roberta at the IoD in WMV format