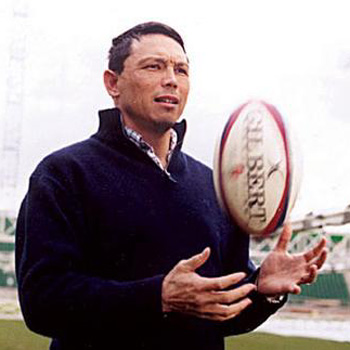 Rory is England's most capped player, with 85 appearances, and is the highest tryscorer with 49 tries! Including a record 5 in one match ( Against Fiji 1989).

A great converter of chances, given just a smell of an opportunity he rarely missed getting onto the scoresheet. Like all world class wingers he had great pace, plus an uncanny knack of being able to direct his powerful frame infield and squeeze inside the corner flag when there was no obvious gap.

Rory played against Wales 14 times! Scoring 6 tries in 7 wins and 7 losses. The worst of these for Rory was in 1993 when he went to sleep for a split second, which was all Iaian Evans needed to sneak past and score, to give Wales a 10-9 win! There is some consolation in the fact that he has scored 4 tries whilst being marked by Iaian.

Rory toured with the Lions to Australia in 1989, and New Zealand in 1993 playing in 3 games on each tour, but only managing 1 try.