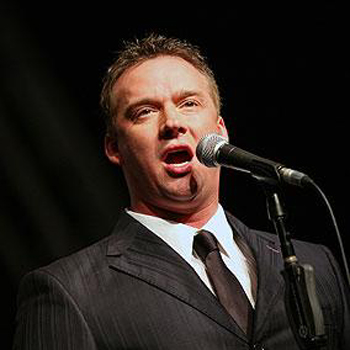 Russell's music career moved to the next level in 1999, when he was invited to Old Trafford to sing the World Cup anthem 'Nessun Dorma' before United's Premiership Winning game. He received a standing ovation and this incredible exposure led Russell to be signed by the Decca Music Group for a six-album deal.

A factory worker born in Salford in North West England, Russell went from performing on the pub and club circuit in his spare time, to selling over 5 million albums world wide, and to be dubbed 'The Peoples Tenor' taking opera and classical music to a new audience world wide.

Russell has performed around the world in front of many audiences - from Independence Day celebrations in Washington DC and the Beckhams pre-World Cup party; to more intimate performances for the President of the United States, the UK Prime Minister and the Pope; as well as duets with artists as diverse as Cliff Richard, Lulu, Lionel Ritchie, Mel C (of Spice Girls fame) and Meatloaf.

With 5 albums each going gold, platinum, or double platinum and 4 Classical BRIT Awards under his belt, Russell is recognised globally as the UK's biggest selling classical artist of the 21st century.
Russell's unique private performance at Kensington Roof Gardens was truly special. Being able to promote such a successful mancunian celebrity helped ensure our event was a resounding success.  Many of our guests have since contacted us expressing their thanks and delight.    Marketing Manchester, 2010
Read More