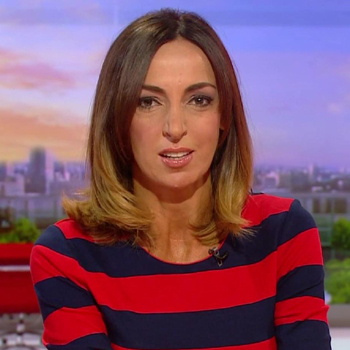 Sports presenter Sally Nugent has been working for the BBC for 15 years, starting as a broadcast journalist at her local radio station - BBC Radio Merseyside where she covered many big stories including the Grand National that never was in 1997.

Sally joined the regional television newsroom and when their sports presenter took a break. They asked her to step in for six weeks but she stayed for two years.

During that time Sally travelled around Europe as Liverpool went on their fairytale UEFA Cup campaign in 2001, which ended in success. She covered the 2002 Commonwealth Games in Manchester - broadcasting live every night and saw the effect a major international sporting event can have on a region and its people. S

Then Sally moved to national news, covering many big sporting events including two FIFA World Cups in Germany and South Africa and in may different conditions. In Cape Town in 2010 her studio was a tiny portacabin with no heating. In the middle of an African winter she broadcast most evenings with a big fluffy blanket over her knees - and a tiny electric heater on full blast!

After the South Africa World Cup Sally decided to look for somewhere in the world where football was making a real difference to people’s lives. She chose Iraq where the Iraqi national football team continues to play despite wars, bombings and huge religious divides. She spent some time with them, travelling round northern Iraq as they prepared for a big tournament. All the players became terrorist targets simply by being on the team - yet they all took risks simply to play in their national shirt.

Sally loves watching sport. Raised in a house where her dad and brothers played rugby and her mum was a tennis coach, she didn’t really have much option.

"It was an absolute pleasure to have her as our host and guest. Lovely person.... She did an amazing job and we can't thank her enough (but I hope/suspect that she'll have had enough of our thanks by now! Just Wonderful!) It's a huge audience to control and she did an amazing job." Director, Alchemy - November 2016