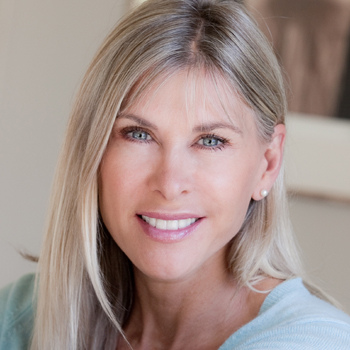 Sharron Davies occupies a unique position in British life. In an age of increasingly fleeting fame and notoriety, she has been one of the UK's best known and most popular sportswomen since bursting onto the scene as a 13 year old Olympian in 1976. More than 30 years later she is still a popular, in demand and much admired character.
As a sportswoman, television personality, devoted mother of three, public speaker, model, enthusiastic charity worker, powerboat racer, author, interior designer and equestrian - Sharron enjoys a busy and varied life and retains remarkable popularity amongst those aged 8 to 80!
Having first swum for Britain at the extraordinary age of 11 she was selected for the 1976 Montreal Olympics and instantly became a household name. At only 14 she confirmed her talents by winning two European Bronze medals only losing out to the then all conquering East Germans. But it was in 1978 that 15-year-old Sharron stormed to the first of her many successes winning Commonwealth gold medals in both 200 and 400m Individual Medley events.
Her astonishing form continued and in 1980 she took a battling silver medal at the Moscow Olympics finishing just behind Petra Schneider of East Germany. Ms Schneider has since admitted that her performance was heavily drug enhanced. An emotional reunion between Sharron and Petra was the subject of a captivating Channel 4 documentary.
As is often the case with prodigies whose success and stardom arrives so early, Sharron decided she needed a break from training and competition and 'retired' at the age of 18 to pursue a media career. However the lure of the water proved too much and she returned in 1989 and promptly regained her national 200m title.
As ladies captain of Britain's 1990 Commonwealth Games squad she led by example and returned with silver and bronze medals.
Twice voted British Press Sportswoman of the Year, Sharron's incredible international career spanned three decades, included numerous major titles and medals, 200 British records, some of which stand to this day (including the 20- year-old 400 IM record), 5 World Masters records and an MBE awarded by the Queen for services to sport.
Retiring from competition in 1994 Sharron has become a regular on television and in the press. As a key member of BBC television's commentating and presenting team she has covered many major events including the Seoul, Atlanta, Sydney, Athens and Beijing Olympics. The London Games will be her 10th Olympiad as a competitor or broadcaster.
Sharron has also presented TV's The Big Breakfast, been the subject of a Channel 4 documentary, co-hosts Superstars, adorned the covers of many leading magazines, written for publications such as Total Sport, Cosmopolitan and The Independent, as well as contributing magazine features on one of her biggest hobbies interior design.
Other television work includes a successful 26-part series on Parenting and ITV's Gladiators, where as Amazon she won over a whole new generation of fans. A serious knee injury forced her out of the all-action show after two years, but the resulting 5 operations failed to dampen a further sporting passion skiing! She has also chalked up many appearances on favourite programmes such as Question of Sport and They Think It's All Over, while her versatility has seen her involved in TV campaigns for Ribena and Ultralase amongst others as well as popping up in series such as French & Saunders and The Hale & Pace Show!
Sharron has written several books including an autobiography, fitness and pregnancy guide, a learn to swim book (translated into 10 languages) a back care book, a Fit For Life CD-Rom and a fitness video.
Hobbies include horse riding, fashion, art, architecture, keeping fit (still regularly working out in her extensive home gym) and skiing. And thanks to her involvement in ITV's 2010 series of Dancing On Ice, she has become an avid and dedicated ice skater. However her greatest passion is her three children Elliott, Grace and Finlay who are regularly by her side during her travels.
As patron of Disabled Sport England and The Sports Aid Foundation Sharron devotes much time to charity. But it is with her very own annual swimming event Swim For Life that she has become widely known. Launched over 15 years ago with Princess Diana - it involves 2,000 pools nationwide - and has since raised millions of pounds for different causes. Sharron remains in constant demand for media work, motivational speaking and public appearances throughout Europe and works with many household name companies on a regular basis including Bernard Matthews, often with family fitness in mind.
"We very much enjoyed Sharon's company at our conference. She was a great hit with our audience, and won them over with her life story which very much hit home to people the necessary attributes needed to be a winner. Not many people leave our auditorium with a standing ovation, but Sharron did.  Reed Employment, 2010
Read More